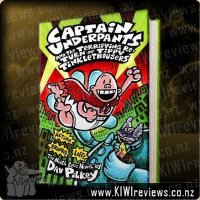 Disclosure StatementFULL DISCLOSURE: A number of units of this product have, at some time, been supplied to KIWIreviews by the company for the purposes of unbiased, independent reviews. No fee was accepted by KIWIreviews or the reviewers themselves - these are genuine, unpaid consumer reviews.
Available:
October 2012

Tra-la-laaa! Captain Underpants is back in an all-new epic adventure that's the zaniest, funniest, outrageousest, and time-travelingiest yet!

When we last saw our heroes, George and Harold, they were under arrest and headed for prison. Then Harold foolishly uttered the fateful words "What could be worse than going to jail for the rest of our lives?" and changed the course of human history.

In this ninth epic novel, Dav Pilkey takes readers back in time to the carefree days of kindergarten, when the worst thing George and Harold had to face was NOT evil mad scientists or alien cafeteria ladies but a sixth-grade bully named Kipper Krupp, the nephew of their clueless school principal. And because George and Harold don't actually invent Captain Underpants until fourth grade, the two clever kindergartners are on their own -- using their brains to beat the bully.

Hold on to your UNDERPANTS -- the Captain is back!

Super Diaper Baby 2 - The Invasion of the Potty Snatchers
Rating: 9.5

My 6 year old daughter was given a copy of of the Captain Underpants books and when we started to read it she liked it. Well when I went to pick my review stock up, I was given the opportunity to review the Terrifying return of Tippy Tinkletrousers. Before we had even left the driveway she was excited to see another one. She also now looks at her school book club and is wanting to pick out all the Captain Underpants books she can to get the series (This sounds expensive to me).

Reading a little each night she always love bed time reading (yet for some strange reason never bed time itself *Insert Sad Face*), she would always have the book ready at the page we were up to and then after the reading she would want to read a couple of pages herself which she did quite a good job with.

The story line is well created and the idea of making the book in the style of a child writing it - right down to the spelling of the words - is quite well played. The book was very funny in places and who can really resist the misfortune of a pair of giant robotic pants having so much in them and getting into trouble. My daughter found the bullies were not very nice which is telling her what is right and what is wrong, which is great.

Even though this isn't my type of book. I did find myself laughing with my daughter and more enjoying the daddy/daughter time and encouraging her to read more. Well, it is best to start building her reading collection up with the books she loves.

My daughters response was "I like how the flippies worked, the way the pictures looked without colour. She also like how the good guys teased the bad guys and the Giant Robo Pants, and how the super hero would take all his clothes off except his underwear."

This book had me laughing out loud....I had heard of Captain Underpants through my nieces but had no idea reading the book would be as funny as I found it...once I started reading it I couldn't put the book down!! I did find it weird though reading a book this far into the series as I assume most of the storyline was based upon the previous books in the series so I found myself lost at times, but the story eventually made sense as I read more.

I thought the comic book/picture book throughout the book is excellent for young readers transitioning into harder books/novel readers, as the comic strips and pictures are just about on every page allowing the reader to associate the words in the book to the pictures which would help develop their imagination when they move onto the next level of books that don't include pictures.

The two main characters George and Harold are just delightful, very mischievous but delightful, they use their 'evil' plans for good and save the day for all the children that are getting bullied and picked on by an older boy and his friends. Since the book is based upon the two young boys telling the story I did find it off-putting the mis-spelt words, and letters written backwards etc...not sure if it is the teacher coming out in me or just because it was weird not seeing it written correctly.

I did like seeing the hand drawn pictures from George and Harold though and would be interested to know if young children did draw them or if the illustrator did because they are very realistic of how a young child would draw; and the pictures were very much in keeping with the style of how the story was told.

I would be very interested in reading the rest of the series for this book to make sense, and I recommend it for all readers of a young age as it is a very easy read and has enough drama and action and comedy to keep the reader engaged for cover to cover. A very enjoyable read.

Our first introduction to Captain Underpants was book 10. So going back in time and reading book 9 was a little bit "spoiler-alert". But there was also plenty in the book that we didn't know would be coming and so plenty to enjoy. The books are quite episodic in nature, meaning you really don't have to have read every tome in the series. But there are some threads that seem to carry through the books, meaning you are in on the secrets if you have read more than one.

If anything, I would say my daughter found this book even funnier than book 10. Many of the most fun moments happen to children only slightly older than her. I think this helped her relate to why the things were funny. All the pranks had us both rolling around on her bed laughing. One quiet weekend day while baby was napping we took to her bed to read. She was laughing so hard she couldn't breathe! I had to stop to let her recover before going on. I was not just loving reading this book, but the added bonus of quality alone time with my big girl. Plus there are pieces in the book that are supposedly written by a gifted 5 year old. I was able to point out to her all the words not spelt correctly. I then asked her if that made the child a bad writer. She said no, so I was able to turn it into a bit of a teachable moment for her because she is struggling to try writing for fear of getting words wrong.

Other adults read from the book to her during the week as well. Daddy read a chapter or two one day and even he was laughing along as the author breaks the fourth wall a little with comments about annoying the reader. I loved many of the jokes that seemed to be there for adults as much as anyone. Something made to look really old is followed by a comment about it looking like it's from the 1980s or something. What can I say, I just really appreciated the little digs at us oldies. I was a little sad when the book came to the end. My daughter enjoyed the book so much in fact that I'm on strict orders to go to the library to see if they have any of the others in the series. I personally can not wait to go!

This is a hardback book with black and white text and photos. It is kind of comic book/ cartoon style in places but has lots of pictures. Pretty much at least half a page on each page is picture. That makes this a good transition from picture books to first readers. Aimed I should think at boys, this will appeal immensely to the target market.

This is the "ninth epic novel' of Captain Underpants though the first I have read. I really enjoyed reading this book. This story actually goes back in time to kindergarten when George and Harold were without "Captain Underpants". I really liked the description of the impact of going back in time and how changing something further back in time can completely alter the future. This book is brilliant for helping children to get their heads around that concept.

I didn't feel that I needed to read the previous books to enjoy this story so that was great. As well as the subject of "time travel" this story also addresses bullying. I felt that this was really well addressed and I think the way of conveying the story through a mix of "normal" sentence structure and using cartoons and comic strip style is a great way to keep young boys interested in what they are reading. I liked the main characters and found myself laughing as I read this. It is quite funny. It is also very "present time" with one scene being that of four bullies being laughed at and their humiliation being filmed on students cell phones. I think this is probably a good book if you wanted to have a platform to discuss some of those issues with your child.

A really good book that I will definitely keep in mind for gifts for young boys ie about 5- 10years.

Pip is a girl who can talk to magical creatures. Her aunt is a vet for magical creatures. And her new friend Tomas is allergic to most magical creatures. When things go wrong, as they often do, Pip consults Jeffrey Higgleston's Guide to Magical Creatures, a reference work that she finds herself constantly amending, dealing with magical creatures like unicorns, griffins and fuzzles doesn't just require book knowledge, it requires hands ... more...