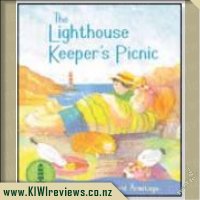 Mr Grinling loves to eat and Mrs Grinling is the best cook in the whole world! She puts on a scrumptious spread for the village picnic, but later Mr Grinling wishes he had not eaten quite so much.

For an illustrated children's book this is fairly long at 30 pages so you are getting good value for your money with the illustrations which are lovely. The story however is a different kettle of fish. The plot is basically that Mr Grinling has been eating too much and has got quite fat since he semi retired. They go along to a picnic where they eat lots more of Mrs Grinling's amazing food and then have to be rescued by Sam when their boat floats away, because Mr Grinling is to large to fit through a hole in the rock to take the shortcut home. He then goes on a diet but cheats (aided by Sam) so doesn't lose any weight. He and Mrs Grinling then go for a ride in a hot air balloon (which Mrs Grinling had earlier told him he would be too heavy for if he didn't loose weight) which he declares to be better than eating.

The message I got from this is that you can be rewarded even when you don't achieve your goals which seemed a strange message to be sending to children. I found the story very long and winding and without much purpose. Having said that my girls really liked the story and Miss Three and Miss Six really love reading it for the illustrations. It certainly triggered lots of discussion about eating too much and treat foods and overeating. I was disappointed in this book and would have preferred it to have a more positive message to send to children.

The illustrations are captivating and I can recommend this book if you do love the original "The Lighthouse Keepers Lunch" however do read it with your child and discuss some of the issues in this.

I read this book to my kids last night. I was keen to read this one, as I remember the character well from my own childhood. This story seemed quite long and winding compared to the Lunch tale though and I found it difficult to understand what the book was all about. However, there were a few moments in the book when I consciously did think about changing the language.

Basically Mr Grinling has gone from working at the lighthouse everyday, to only doing it part time. As a result, he is eating loads of food because as we know from the first book, Mrs Grinling is an excellent cook. They have a really bad time, and it is all put down to his eating and getting fat. He has a dream that he wants to fulfill and the wife is not very nice about it. In the end his dream comes true, but I'm not sure anyone learns anything. So the book is a bit rambling, and some of the behaviour of the people in it I wasn't 100% pleased with.

The book was originally written in 1993, and I know I have a few other classic children's books from the same era that have similar themes in them. So I think it's just the way people wrote about diet and exercise back then and earlier as well. I thought the tale was older than that, but the original Mr Grinling was written about in 1977, so quite a gap between tales.

I would say that the story will be engaging enough for most kids. If the f word (fat) is a bad word in your household, then you may wish to start a teachable moment for your kids about words and proper diet and exercise before you launch into the book. I found that despite the wording in the book, my kids were happy to listen and we talked about some of the things said and what was helpful and what wasn't. We also talked about nutrition and how treats are not everyday foods.

Julie Grigio drives with her parents through the crumbling wastelands of America - a nightmarish family road trip in search of a new home.

A few hundred miles away, Nora Greene finds herself the reluctant, terrified guardian of her younger brother when her parents abandon them in the not-quite-empty ruins of Seattle.

In the darkness of a forest, a dead man in a red tie opens his eyes. With no memory of who or what he is, he ... more...