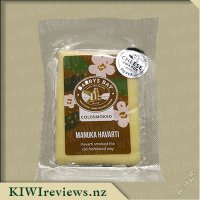 Disclosure StatementFULL DISCLOSURE: A number of units of this product have, at some time, been supplied to KIWIreviews by Barrys Bay Cheese or their agents for the purposes of unbiased, independent reviews. No fee was accepted by KIWIreviews or the reviewers themselves - these are genuine, unpaid consumer reviews.
Available:
via online store and supermarkets nationwide

Our smooth and creamy havarti with a distinctive, balanced smoke flavour

Havarti is a cheese that I still haven't quite managed to get into, I just don't quite like the texture and it tends to be a little too creamy for me, and taste wise I have yet to find it very appealing. Opening it up I could tell very easily that it was smoked, that stood out for me. Cutting this, I had to use a slightly longer knife than I usually use due to how soft it was, but I managed to get there in the end. My eight year old loved this, they're a big fan of anything creamy, so they polished off what was left on the plate when we had crackers and cheese.

Tasting this on its own, I really didn't like it, however my youngest if allowed would chow down on what's left in the packet whilst my nine year old says they'd like to have it with some crackers again. I made some mashed potatoes and I usually smother it with Parmesan before cooking it in the oven a little, I opted to use some of this havarti on top instead and to see how it would go with the potatoes. It worked out ok but not enough to inspire me to ever do it again, even the kids asked me to do my normal recipe next time. Whilst the cheese was alright, it's not one we will be buying.

I love Havarti. One of my favorite cheeses. Really like it on oat crackers, but if I'm out of crackers I have been known to just to eat it plain. I've found I'm not a smoked cheese fan. The ones I've tried in the past have left me feeling like I've just finished munching on a brunt log from the fire place. No thank you. But this product being Havarti and Manuka smoked intrigued me. I thought I'd be adventurous.

My first bite gave me that feeling once again that the smokey flavor was too strong. I thought that I was going to be disappointed again. But after giving it another couple of bites I think my palette got used to the smokey taste that after each bite it became less and less noticeable. Then the lovely Havarti flavors came to the forefront. I tried it with my favorite crackers, but found that I noticed more of the smoke and less of the Havarti taste. So I had it by itself. Much better. Then I thought, "Hey it's winter, it's the weekend, it's after lunch, and it's cold. I would love a drink." So I raided the liquor cabinet and found one of my earthier ports. It pared very nicely with the cheese. Wine and cheese never fails.

While this won't be something I buy much. I do believe, compared to other smokey cheeses I've had in the past, the product description of this cheese having a "balanced smoke flavor" is pretty correct. I felt once acclimated to the smoke taste you could then enjoy the cheese flavor. I do feel the price is pretty high for a small amount of cheese. I reckon $5-6 would be more reasonable.

Barry's Bay makes some of the yummiest cheeses that I have ever eaten, I always look out for them at the supermarket when they are on special and make sure I stock up as they generally have pretty good best before dates. Havarti is one of my favourite types of cheese, I love the relatively soft texture of the cheese and the way it melts which reminds me a lot of that of Mozzarella. When I saw a new variety of Havarti out which so happens yo be this cheese I was excited to see how it would taste after being smoked in Manuka Wood chips.

The cheese comes in a small plastic wrapper and is 110grams in weight, quite small for the price tag of $8, however this is a gourmet cheese rather than a cheese for everyday use so fully justifiable. Opening the cheese up was easily done by peeling back a corner of the plastic, and I was impressed by the slightly smokey smell I got from doing so. My apartner, Miss 6 and myself were all quick to try a slither of this delectable cheese and all agreed we really liked it, it still had everything that we like about Havarti going for it but also had quite a subtle smoked taste to it, it was very tasty and I could picture many uses for it.

For dinner we were having chicken burgers so I opted to put the Havarti on them. After piling lettuce, tomato, crumbed chicken and bacon onto the bottom of each bun, I spread some mayonaise and barbeque sauce on the lids and topped each with 3 slices of the cheese before popping them in the microwave so the cheese would melt. The cheese melted beautifully, and could be tasted throughout the burgers I loved the added smokiness... Yum.

With the remaining cheese the next day I made cheese and chutney toasties for lunch, again the Havarti worked its magic, melting without any hassles and tasting amazing. Miss 6 declared her lunch delicious, and for a child who has recently stopped eating cheese to say such a thing it must be good, she's even asked that I buy it for in her lunch box.

Another quality cheese from Barry's Bay, one that you should try and one which I will buy again, lovely and soft, great for melting or eating as is. 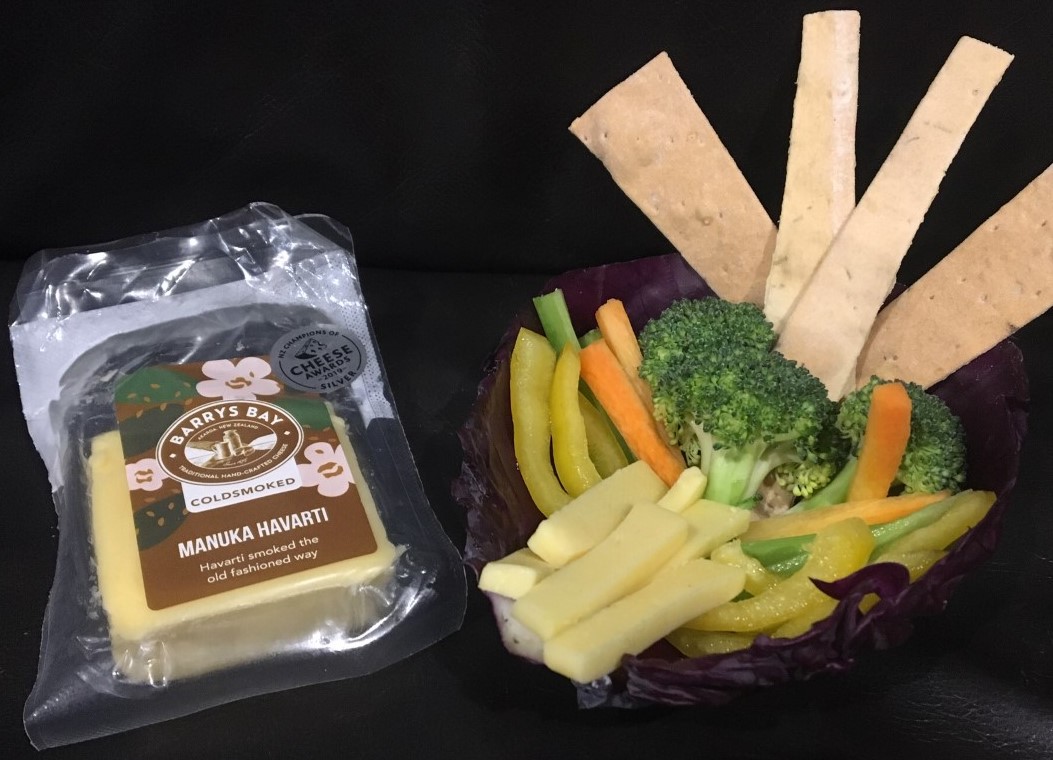 Havarti is one of the nicest cheeses I know. I could have easily eaten the whole packet on its own, just me - no family members to help review it, no other food items to add interest... Luckily, the children brought me back down to earth just as I was enjoying my first bite. They had volunteered to organise some raw vegetables and crackers to go with it, and of course they were expecting to review it too, so my plans for a personal cheese fest were discarded before I could carry them out.

Although the price is relatively high, it is comparable to what we would pay for a good quality camembert - and possibly nicer, according to the children. It has a lovely smooth, creamy texture and a lingering scent of manuka smoke. The texture was perfect with crunchy vegetables and garlic-and-herb crackers providing an interesting contrast. The children had cut the cheese into sticks to make it go further. We liked it with the broccoli florets and capsicum, and when they ran out Mr Nine added some cucumber and carrot sticks. The crackers were not as successful - all of us thought they masked the Havarti flavour which is fairly delicate.

I like the idea of a small packet as the flavour is preserved until the seal is broken. That first whiff of manuka smoke is so attractive, but I imagine if the packet is open for too long that flavour might dissipate. Not that it got a chance with all of us around; the contents of the packet were all devoured within half an hour. However, for catering purposes, it might be nice to be able to get it in a larger pack - possibly a 250g size, which would be just over double.

Miss Seven made a suggestion that is worth noting. She said that it would be lovely for a school snack with some dried fruit like dates or raisins, packed into one of the small lidded containers that she uses in her lunchbox. She said it would travel well on a hot day because the dried fruit would stop it squishing - and if the cheese did get a bit soft, the food would just stick together. She is not allowed nuts at school because some of her classmates are allergic, but the cheese and fruit combination would still make a high energy snack - one which she and her brother would enjoy eating.

One recipe I will try out at some stage when I get another packet is a stuffed potato recipe my great-aunt used to make. You scoop out the inside of a baked potato, mix it with small pieces of Havarti, some pimentos and a knob of butter, then put it back into the potato again to reheat in the oven. Decadent and filling - and a wonderful winter meal with a bowl of home-made soup. I think the smoky flavour of this Havarti would add another dimension to this recipe.