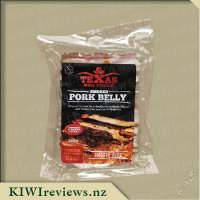 We use real NZ pork. This is seasoned with our own recipe rub, smoked with mesquite and slow cooked for up to 16 hours. Like the beef, it is so tender it falls apart and melts in your mouth.

This pork belly--much like the beef brisket that Texas BBQ Foods does--is great because of its simplicity. Preparing and cooking a pork belly is usually a 16+ hour event because you have to cook it until the bonds in the meat and fat begin to degrade, making everything incredibly tender, and allowing the flavour of the fat to fully integrate itself into the meat. But that is what makes this a sometimes food. Not many people have the time to spend nearly an entire day to ensure the meat is properly cooked.

This product, on the other hand, requires less than 10 minutes to prepare, and can actually be eaten cold as well, as the cooking process has already been completed prior to packaging. The simple process of throwing it into the microwave for less than a minute to cook is perfect in this day and age of being overworked and underpaid, where you want to just go home, eat and rest.

And that is exactly what I did. I threw a couple of slices of toast into the toaster, threw the product as it is into the microwave, then jammed the cooked product into the toast, with a bit of mayonnaise and bam, dinner done in less than 3 minutes.

What I did find, is that the flavour of the pork belly was not too strong. Subtle would be a more suitable term, filling the mouth with a warm almost earthy flavour. Unlike the beef brisket, the pork belly didn't have that burnt edges flavour to it, which made the taste much milder by comparison. The meat also held itself together much better than the brisket did, though the fat remained very soft. The product came with a little more moisture than the brisket as well, presumably from the fat liquefying during the cooking process, as it had no thickness and languished in the bottom of the packet.

The flavour was really much more subdued than I was hoping for, making the tenderness of the meat the only really enjoyable aspect of the that works towards justification of the price. I'd definitely recommend having your own salts and spices at the ready or even simply table sauces to accentuate the flavour of the meat.

I would definitely recommend using the stovetop method of cooking, as the slightly slower method will help reheat the full portion of meat without drying out, to maximise the tenderness of the meat.

Pork belly is a cut of meat that I'm pretty certain I've never tried before, so getting something new is always a plus. At basically $12 for such a small amount, I knew that it was probably a meat where you wouldn't need too much per person but also that, unless it tastes ah-mazing, it's probably not a meat I would buy very often for my family of four. I'm not sure if it was just my packet but I could see that there was a lot of fat on the meat, which would put me off buying a pack (when I buy meat I try to get cuts with the least fat as no one in my house particularly likes meat fat).

I had company for dinner and realized that I hadn't grabbed anything out of the freezer to use in dinner, looking at this I decided that it would work and we could see how it tastes and I could get four extra opinions on it. I cooked up a nice red wine and rosemary sauce, added some veges (garlic, onion, carrots, celery, mushrooms) and then diced this up very small. I did find that it all stuck together but I didn't heat it up first, had I done that the pieces probably would have come apart easier, so don't try to separate when cold. I added the meat to the sauce and left it to simmer for a while. The meal was well received by everyone who had some, with five people wanting seconds of the sauce. The meat added a nice, almost bacon flavour, to the dish.

While this was enjoyed, it's a little above my budget when dealing with meals, however, I may get a pack and give it to my dad when it comes time for his birthday as this is something he would enjoy. 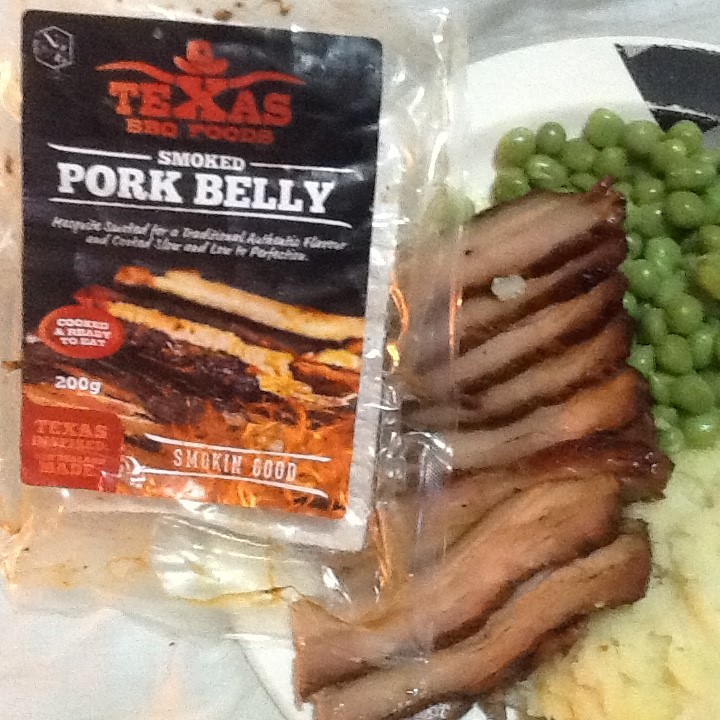 We all enjoy pork belly, especially when we don't have to actually cook it! And this could not have been easier to prepare. Because the pork might be spicy (judging from the ingredients), I kept the rest of the meal simple. I had mashed some potatoes and opened a tin of marrowfat peas - she is British and they are her favourites. Since she is elderly and does not get out much, I try to spoil her when she does come. The meat was ready and on our plates in less than a minute and we were good to go. Whatever did we do before the days of microwaves?

As soon as I tasted it, I realised I had not needed to be concerned in case it was too spicy. The balance was just right, and the quantity was just right too. Although I had thought when I opened it that there would not be enough for two people, the meat was quite rich and there is no way either of us could have managed more than half the packet. I even ended up leaving one of my slices and putting it in the fridge for later because I had had enough.

I had my leftover slice later that evening but found it was not nearly so tasty once it had gone cold - it is quite fatty so I would recommend reheating it if there are leftovers another time. The 200g pack is quite expensive for the weight, but there again it did feed two people and there was even a little bit left over, so that would probably compare favourably to other meat servings. We also both loved the smoky flavour; it made the meat taste a little like wild pork instead of the farm-fed variety. When she first came to New Zealand she lived on a farm and the locals often called in with some wild pork: they used to cook it over a barbecue, which of course imparted a similar smoky flavour.

My friend said she was pleased that the meat was so tender because she had no trouble chewing it at all. When I had invited her over and had told her we were to be having pork belly, she was a little concerned in case it was tough. Her son had cooked fresh belly pork slices in a frying pan the week before, and she had found them quite difficult to chew. This was a different meat entirely, and she said she might even source some for herself. I told her she should be able to find it in her local supermarket. I hope she asks me over to share it when she does!