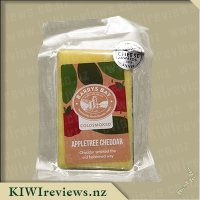 Disclosure StatementFULL DISCLOSURE: A number of units of this product have, at some time, been supplied to KIWIreviews by the company for the purposes of unbiased, independent reviews. No fee was accepted by KIWIreviews or the reviewers themselves - these are genuine, unpaid consumer reviews.
Available:
via online store and supermarkets nationwide

Our take on a traditional English smoked cheese which is bold, rich and creamy

I love cheese and always like to try new flavours. I'm not worried about strong flavours as blue cheese is my favourite so I was wondering what this particular cheese would taste like. I noticed that it is not a very large block of cheese so thought the easiest would be to have it plain with crackers so I can get the taste of the cheese.

The price is a bit high for such a small piece of cheese but I will be buying it again for special occasions and to try in other ways. I had a look at the packaging to see what information was included, the front is nice not too busy with pictures and such and the back has information about ingredients, how to store the cheese and that it is best at room temperature. Best of all is the website for further information.

My little family enjoy a wide range of cheeses, so asking for this was a no-brainer. My kids were very eager to give this a go and so I opted for the family favourite, cheese and crackers for dinner! The packaging is nice, simple and sticks with the theme. The block is small for eight dollars, though I know from experience that if you want something different to colby, tasty or edam, then you're going to pay almost the same amount for far, far less product. Opening this up I didn't get much of a strong smell from it but sometimes it doesn't pack a punch until it hits your tastebuds.

My eldest, who is a little more selective of their cheeses, really enjoyed this one, coming back for more. My middle child wasn't as interested in this as she was some of the other cheeses on offer whilst my youngest was keen to finish the lot and was dissapointed when reminded that the rest of us needed some too. We're getting back into making toasted sandwiches, a firm favourite of which is simply cheese and onion, so I grabbed the Appletree Cheddar to try in this and let it cook as I normally would. The end result was delicious and so I'm sorry kids, but I'm using the rest of this for my next few toasties.

My family goes through a lot of cheese each week, and when it comes to buying cheese Barry's Bay Cheeses are our favourites, we buy them as much as we can especially when they are on special. Cheddar cheese is usually our go-to cheese, as it tends to work in so many different dishes, it always goes great on its own or paired with crackers. I was intrigued to try it in smoked form, in this case, smoked with Apple tree wood chips, though being a Barry's Bay Cheese I knew it wouldn't take much to impress me.

Opening up the packet I wasn't hit by an overpowering smoked smell which was good. I cut a slice of the cheese into 3 small pieces so that my partner, Miss 6 and myself could all try a little bit. My partner said he liked it and that it tasted just like normal cheese, Miss 6 said she really liked it and that she wanted me to keep some aside for her to take to school on a sandwich. I loved it, it had the taste of a lovely Cheddar, but the flavours of the smokiness soon came through at just the right hint.

I put a small amount aside for Miss 6's sandwich at school and the rest I decided to grate up and use in Macaroni Cheese which I was making for dinner. After making up a white sauce I mixed in the Apple Tree Smoked Cheddar and a bit of Mozzarella along with some fried up bacon and placed it in the oven to cook. The sauce bubbled away nicely in the oven and the cheese melted perfectly. When I dished it up I could just so slightly smell the smokiness from the cheese. I gave a plate to each of my family without telling them that I had used this cheese in it and waited to see if they noticed anything different, my partner said that it tasted better than usual and that the sauce and bacon were nicer, I had to agree the smoked flavour from the cheese had not only livened up the pasta and sauce but it had made the bacon taste even better, it was almost like it had helped to bring out its flavours.

The price tag is a little higher than most cheddars you can buy, however, it is a bit on the gourmet side of things so very understandable and not something that will put me off buying it again, especially the next time I want to make Macaroni Cheese! 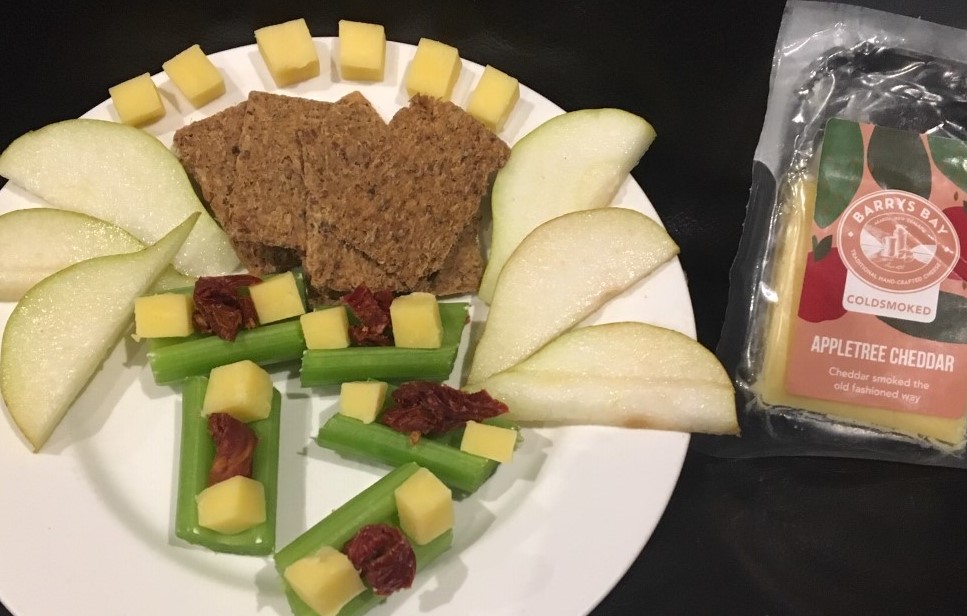 This is a solid cheddar with a nice hint of smoke - just enough to bring out the flavour but not enough to take over. In strength I would mark it around the Mild scale. Although the smokiness gives it a distinctive taste, it does not make it a strong cheese. The children tried it and both of them said it was about right for their palates! It is a firm cheese so would be nice in any recipe that calls for cheddar as an ingredient. However, it is also nice on its own or on a platter. We all tasted a small piece, and then my daughter made up a platter with crudites and other hors d'oeuvres.

We all tried it in various combinations. It was especially delicious with celery and sundried tomatoes. When we first bit into it, we could not really taste the cheese - but then the smokiness filtered through and the three different flavours fused beautifully. Even the children liked it this way, and we had to keep topping up the plate - so much so that we finished the whole packet of cheese! We also really liked the combination with slightly underripe sliced pear. We could taste the pear and the cheese as two completely separate flavours which sounds strange, but I guess you have to try it. Either way, it was very tasty and something to remember for cheese platters in the future.

We then tried it with olives. My daughter had some sliced spiced olives in her cupboard, and I had brought some whole marinated olives, so we tried it with both. All of us preferred it with the whole olives as the cheese flavour tended to get lost when it was combined with the spicy version. However, all the mixtures were palatable, and it was certainly fun to try them out. The cheese left a rich aftertaste behind - as Mr Nine said, you did not need too much because you could still taste it for some time afterwards. He had tried smoked cheese before and found it too strong, so it is interesting that he found this one acceptable - he is a fussy eater and does not always like what everyone else is having, particularly if it is highly flavoured.

I can see myself using this in place of regular cheddar for a party tray. It has a more adult flavour than ordinary cheddar; even the smoky smell, although not overwhelming, is pleasantly pungent, We were interested to read on the packet that this cheese should be served at room temperature because we would not have thought of doing this with a hard cheese. Obviously, it is not as flavoursome when it is chilled - like soft cheese, it needs time to breathe before being consumed. I am glad we read the small print before serving it so that we tried it at its best.

Now you can season like a real foodie or masterchef, without having to buy loads of expensive, exotic ingredients or wait for time-consuming wet marinades. Within minutes your favourite cut of beef, steak, chicken, lamb, pork, salmon, seafood and vegetables will be ready to barbecue, roast, pan fry, grill or bake. Out on the bbq or in the kitchen, ... more...