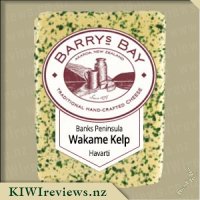 Disclosure StatementFULL DISCLOSURE: A number of units of this product have, at some time, been supplied to KIWIreviews by Barrys Bay Cheese or their agents for the purposes of unbiased, independent reviews. No fee was accepted by KIWIreviews or the reviewers themselves - these are genuine, unpaid consumer reviews.
Available:
via online store and selected retail outlets

We are a family that loves cheeses. We will eat anything as long as it isn't blue. My girls were excited when I told them that I had a new cheese for us to review, Barrys Bay Wakame Kelp Havarti. I was fully expecting them to take one look at the green flecks of kelp on the cheese and refuse to try it. Instead none of us mentioned anything about the kelp and they enjoyed the cheese. The kelp was only on the outside of the cheese so when I served them a small slice on a cracker it was hardly noticeable anyway. Once they had eaten a few slices and obviously enjoyed it I told them that the green stuff was seaweed and this didn't change their opinion on the delicious cheese.

I thought the kelp would give the cheese a salty taste but to be honest I don't think it did anything to the taste but it probably improved it's health benefits and nutritional value. We found that once you started eating it you couldn't get enough. Miss 7, Miss 9 and myself polished off the whole block with crackers and salami for afternoon tea. We found the smooth mellow flavour of the havarti complemented the Swiss Deli Venison Salami with Juniper Berries.

This is an award winning cheese and the price reflects this. It will be something I will buy for special occasions along with one of two of Barrys Bay other great cheeses to serve on a platter. The kelp on the outside will help for it to stand out on the platter.

Cheese just makes everything taste 100 times better... pizza, pie, crackers, potato, I could go on all day!!! I have tried Barry's Bay Cheese in the past due to KIWIreviews and they now are something I buy regularly when I see them on special in the supermarket! Havarti is one of my favourite cheeses, I love it due to its mild, slightly sweet taste and it's creamy soft texture so when I saw a new variant to this delightful cheese, Wakame Kelp I was excited to try it, even though I hadn't a clue what this ingredient was!

After googling Wakame Kelp I found out that it is a type of seaweed which has actually been classed as a superfood! When eating sushi I tend to pick off the seaweed outer and not eat it so I was interested to see how I was going to go with this. The cheese was well coated in finely chopped Wakame Kelp and I was expecting that it was going to be mixed through the cheese as well however this was not the case, the cheese when you cut into it was a creamy yellow colour like that of Havarti which I have come to know and love and the herb was only on the outside. I cut a piece off to try as it is and I was pleased with the taste, it was something I could happily eat. The Havarti was beautifully creamy and full of flavour, however the kelp wasn't at all strong I did think it was going to be a lot saltier than it was. But the most important thing was that Miss 4, my partner and I all loved it.

I added some grated Havarti Wakame Kelp over top of a macaroni cheese I had made before baking it in the oven, it melted beautifully and the specks of Kelp over top of this made it look a little bit fancy. With The rest of the cheese I served it upon mouse traps, I spread some bread with fruit chutney and then added some chopped bacon and the reminding Havarti the flavour combination was great and went down a treat.

This is obviously a lovely cheese, however I don't think I would rush out and buy it in a hurry knowing I can get the Barry's Bay Havarti which tastes so similar to this, due to the Kelps subtle flavour. It is worth trying however if your wanting to explore a different flavour of cheese. Great for eating as is and also for melting over a dish, YUM!!! I am a great fan of Barry's Bay cheeses. Whenever we go to Banks Peninsula we check to see if the shop is open, and if it is we make sure to call in. I am not sure if it is the locally sourced milk they use as their base, but there is something very special about the flavour of their cheese - lots of variety, but all with that indefinable quality that is so yummy.

When I got the opportunity to try the new Wakame Kelp variety of havarti, I was overjoyed. I had just bought some of their plain havarti so it would be useful to compare. Havarti is of Danish origin; add Asian kelp and you have a truly international product since this version is firmly based in New Zealand. I have liked kelp since I lived in Ireland for several years and became very familiar with the local sea vegetables - laverbread, carrageen (Irish moss) and dillisk (dulse), all of which I learned to cook with varying degrees of success.

I was a little disappointed when I took my first taste of this product. The havarti is up to its expected standard of creaminess and full flavour, but the kelp is very subtle. I could taste it but only just. This was a shame as I had expected a saltier, more "seaweedy" onslaught of flavour. My companions, who were helping me to test the cheese, were equally disappointed that the kelp taste was not more prominent. One said that, like me, she could just taste it. The other said she could not taste it at all but she does like very salty food and thought that might be the reason. She had expected the kelp to taste quite salty.

Apart from the lack of kelp presence, however, all three of us liked the cheese. It is soft and creamy with a very smooth texture. We served half of the packet sliced on to toasted cheese muffins, where it melted slightly into the hot surface and provided a perfect blend of the two cheeses. The heat seemed to enhance the flavour and it brought out the kelp undertones a little more.

We thought it would be perfect on a cheese board with crackers or toasted pita bread chips, but with nothing too overpowering included as it would mask the flavour. It is already quite delicate so it would be a pity to lose it altogether. One of them, who normally would go for a stronger cheese, said she did like this variety as it had a delicacy all its own. I am not sure what she meant by that, but assume she was saying she liked it.

I am going to try it the Irish way next time, sliced and served on top of hot mashed potatoes. The cheese melts into the potato and gives it a wonderful taste boost. I have tried it with other cheese and it works well with any soft or medium textured cheese - hard cheeses don't work! So that means I am certainly going to buy it again. Nothing makes an omelette like a good cheese, and I have to say that Barry's Bay Havarti has proven itself for me more than once in the past. Combining this with some of the Artisano Ready-to-Pull Beef made for an inspiring lunchtime treat for me today. A simple meal to prepare - heat up a portion of the beef in a bowl while cooking the eggs, adding in the cheese, a handful of fresh home-grown spring onions, and then tossing the beef in just before folding and serving. Top with a grind of fresh black pepper and some sea salt, and that was all it took.

The cheese has a wonderful, creamy, almost buttery texture, and melts quickly and smoothly at a moderately low heat. The residual heat from the meat and eggs was enough to turn about 1/4 of the block into a delightful layer of cheesy tastiness, which also bound the rest of the meal together nicely.

Prior to this, I had used some of this cheese to make a batch of ham and cheese toasted sandwiches, and they also turned out brilliantly with a full flavour and cheesy goodness throughout. This cheese melts so well, without splitting, that it is my go-to perfect cheese for anything grilled or toasted. If it were cheaper, I would seriously consider using it instead of mozzarella for a pizza, just to test my theory... but alas, I would need at least a block and a half for a good sized pizza - because of you're going to do it, do it to the max.

Overall, this is a wonderful treat, and the Wakame kelp flakes don't carry any of the assumed "iodine and seaweed" taste that was mentioned when I talked to them about this cheese. It's a subtle flavour, no more than a hint, which adds a light layer of flavour, not a smothering blanket. Well worth the try, though if anything, I think it could actually use a bit MORE of the kelp flakes, to really bring that flavour up a notch or two, as it would be a a wonderful complement to the soft creaminess of the cheese.