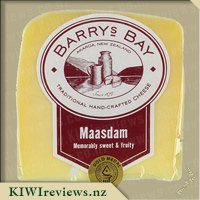 A semi-soft cheese with a memorably sweet, nutty flavour and beautiful 'eyes'.
Crafted as 10kg waxed wheels and then aged on white pine shelves until mature enough to leave home.
Age: 3-6 months

We had a gathering on the weekend with friends, and we put on wine and cheese to help our party along. We selected a nice pinot gris and a few other wines, to match with the cheeses we had on offer. They were all Barry's Bay cheeses including this Maasdam. For snacking, we had bite sized pieces of sour dough, baked wrap wedges and some water style wafer crackers.

Each of us had a few good chunks of this cheese, with various delivery systems. The cheese is creamy and sweet. One of our friends felt that it was a little waxy in texture. We all agreed that it had a strong aroma. This cheese went well with chutney and the wine was a really good partner for it too.

Later during the gathering our children came and joined us. My youngest grabbed some of this cheese and put it in her mouth. She chewed thoughtfully and then disappeared to spit it out. Apparently it did not sit well with her. The rest of the children avoided that cheese based on her appraisal. I suspect that they wouldn't have liked it anyway.

I also tried this cheese melted on sour dough with a chutney and it was a delicious way to enjoy it. It was very welcome for lunches, in white sauces for dinner as well as at fancy wine tastings. Since getting my review chunk, I have since bought more from the website.

The website is really easy to use, and payment went very smoothly too. My cheese turned up quite quickly and it came with a little chilly gel pack to keep it good while it travelled. The chilly pack won't last all day, but it helped keep my cheese good until I got it into the fridge. I was very impressed and will certainly be back to try other cheeses from Barry's Bay Cheese.

I have always loved cheese. Although I haven't tried a lot of different ones. When Barry's Bay Cheese offered some of their Maasdam for review I thought I would widen my palate. I gave my daughters (6.5 and 8 years old) some to try. Neither of them were keen on it because of the strong flavour. I found it very strong by itself but enjoyed nibbling on it.

Since a quiche was one of the suggested uses for the Maasdam I found a simple crustless spinach quiche recipe containing just eggs, onion, cheese (recipe asked for Muenster but I used the Maasdam),spinach, salt and pepper. I found the cheese difficult to crate as it is quite soft and the piece was very thin. I would have had more luck with a thicker piece but I got there in the end. I only used half the cheese that was asked for in an effort to make the cheese go further and keep it healthier. I also used less salt as I felt the Maasdam didn't need more added to it. I was very pleased with the results. The quiche was delicious and the dominant flavour was the Maasdam. I enjoyed the quiche served both hot that night for dinner and cold for lunch the next day. It is a recipe I will be making again.

This type of cheese is not to everyone's liking because of the strong taste but this is also what makes it appeal to others. It is a naturally sweet cheese (no sweeteners are in the list of ingredients) so would be good on a fruit platter dessert. I know if I buy it for myself it will be safe from my little two legged mice and I can enjoy it by myself or when we have guests. The price reflects the quality and means that it is a treat and not something I will always have in the fridge.

I am familiar with Barry's Bay cheese as we often go across to Akaroa when we are in Christchurch, and have frequently stopped to purchase different varieties. However, this is the first time I have tried their Maasdam. This version was smoother than other Maasdams I have tried in the past, and went down a treat with some fine gourmet wafers and a couple of walnuts, although I do admit to trying a piece on its own as well!

The thing that impressed me about this product was the subtle taste - definite but not overwhelming. The smooth texture and fine surface both appealed to me; I could imagine it served with a light relish or a handful of nuts, but never combined with stronger flavours as they would mask the delicate taste of the cheese itself. There is a slight nuttiness to it which leads me to believe it would go particularly well with a few cashews and some grapes, but that is a combination I have yet to try.

A good cheese stands on its own merits. It does not need to be cooked or otherwise embellished. My impression of this cheese is that it more than lives up to expectations. It reminds me in some ways of a good Emmentaler (one of my favourites from way back) but it has smaller holes and is sweeter with a less intense flavour. The texture is firm but creamy, and it cuts cleanly without crumbling - a plus when you want to slice it finely for serving. It also has good keeping qualities; after several days in the fridge, during which time I forgot to overwrap it properly, it had not dried out or lost any of its flavour.

It is not cheap, but if you pay for cheap cheddar, that is exactly what you get. I would actually prefer to pay a little more for a quality product like this and enjoy it in small amounts as a special treat. This cheese is not mass produced on a machine; it is hand-crafted, and that has got to be worth something in today's consumer society!

This product looks like a darker Swiss cheese; more of an slight orange hue to it compared to the pasty yellow Swiss cheese that I see in Subway. Also containing holes much like the Swiss cheese, this Maasdam cheese appears to be simply cut straight from the wheel and packaged, with no further alterations to its shape.

I found the texture to be much more solid than the Havarti that I had previously reviewed, but still soft, and very malleable, holding their shape much better than cheddars when being sliced (No sticking to the knife). This product hits you with a cheddary flavour that moves towards the front of your palate, with a sweet savoury flavour, that comes out of the after taste.

I tried this product on its own, and then tried it with a plum fruit paste on a Tuscan wafer. The strength and solidity of the cheese does make this cheese much more suitable for the harder breads, over crackers and wafers. While it works okay with sweet fruit pastes, it worked a lot better with a slice of pickled onion that I tried it with afterwards, seemingly working best with salty or sour accompaniments.

This cheese does harden quickly though, so be sure to store it in an airtight container after opening, or just eat it all at once.

Made the old fashioned way with great depth of flavour and a rich tomato spice taste.