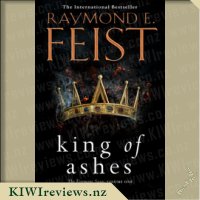 Disclosure StatementFULL DISCLOSURE: A number of units of this product have, at some time, been supplied to KIWIreviews by HarperCollins or their agents for the purposes of unbiased, independent reviews. No fee was accepted by KIWIreviews or the reviewers themselves - these are genuine, unpaid consumer reviews.
Available:
April 2018

Garn once boasted five great kingdoms - until Ithrace was betrayed. Its royal family, the flame-haired Firemanes, was not saved even by its affinity with fire: every one of them was executed by the King of Sandura. Now, four kingdoms remain, out of balance and on the brink of war. But there are whispers that a newborn Ithraci heir may have been smuggled away... Terrified, the four kings place a bounty on the child's head, lest the boy grow up with revenge in his heart.

Declan is apprenticed to a master blacksmith in a peaceful village, learning an ancient craft... until slavers descend upon the village to capture young men to press as soldiers for Sandura. Declan is forced to run for his life, carrying with him his priceless knowledge of the forging of jewel steel.

On the island of Coaltachin, the secret domain of the Quelli Nascosti, three friends are being schooled in the deadly arts of espionage and assassination: Donte, son of a senior master; Hava, a fierce girl and gifted fighter; and Hatu, a strange, conflicted boy in whom fury and calm war constantly, and whose hair is a bright and fiery shade of red...

Reading the first book in a series is always a plus because you don't have that sneaky suspicion that you are missing out on some of the back story, and if it is a good yarn, you are looking forward to reading the sequel. That was the case with this book: it is a long read but captured my attention from start to finish due to its balance between action and description - something which only a skilled storyteller can control. (Incidentally, I was pleased that it was presented in hardback as paperbacks fall apart if there are too many pages, and those in the middle of the book tend to need flattening so that all the print is accessible; this, of course, destroys the binding very quickly.)

The main characters are all well developed so that the reader can visualise them easily. Physical descriptions play an important part in the story because of the different racial and social groups that are pivotal to the plot development. The stories of Declan, Hatushaly (Hatu), Hava and Donte are presented through parallel accounts, intersecting constantly (except for Declan's: he does not meet up with Hatu and Hava until the last few scenes). Most of the chapters are devoted to Declan and Hatu in turn, with Hava being the main protagonist in only a couple and Donte in just one.

The background to the story is the mythical world of Garn which would appear to be the whole world as the characters know it, so it will be interesting to see whether or not the second volume in the series extends beyond this geographical boundary. I found the map at the beginning of the book immensely helpful; whenever the characters travelled, something they seemed to do frequently, I referred to the map to trace their journey.

The social issues explored in the book deal with the aftermath of war and the balance between good and evil; humans are shown to be open to corruption given the right circumstances, but also to have the ability to change when the climate is right. Loyalty and honour are also core values which most of the characters share. The story itself is compelling (I read it from start to finish over two days as I could not put it down!) and even features a surprise ending which is always a bonus. I especially enjoyed the description of the forging of the King's Steel sword; it was so clearly recounted that I felt I understood every step of the process without ever having been near a forge myself!

There is an interesting perspective on religion and its power for good or evil in the story. Monotheism is the source of oppression with its adherents using Inquisition-like techniques to suppress the old ways which acknowledge multiple gods, together with small shrines and temples as opposed to churches and cathedrals. There are parallels with the spread of Christianity in our own world and the disestablishment of indigenous worshipping practices. This is another theme that I am looking forward to following in the next book in the series: the combined effects of religion and power.

There was just one thing in this book that disappointed me. In a work of this calibre, with the quality of the binding designed to complement the contents, there should be nothing to detract from the effect. However, there were several typos which the proof readers had missed - a minor point, but one which annoys me as a reader. Other than that, I was highly impressed with the book - a family member (aged 13) is currently reading it as he had read other works by the same author and had been looking forward to reading this one too. I will be interested to see if he enjoys it as much as I did.

An intriguing illustrated guide to the life and death of the creatures that dominated our planet for 160 million years.

•  Introductory chapters survey dinosaur anatomy and bahaviour, fossil evidence, and the death of the ... more...