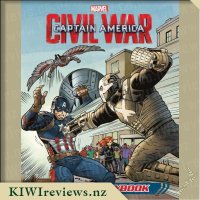 My son was super excited when he saw that I had received this book. Like most 7yr olds he loves The Avengers but is still too young to actually go and see the movies. I initially thought that this was a short book that he would be able to read himself but it is actually quite a long book which I am very pleased about, this makes the book very good value for money being $12 retail. I would suggest more of a 10yr old age gap for those wanting it for their child to read on their own.

The book is very bright and colourful which drew my sons attention firstly then when he saw it was an Captain America book he was stoked. The book obviously tells the story of the latest Captain America movie Civil War and includes all the characters that the kids love Black Widow and Falcon including some new characters Crossbones, Winter Soldier and Black Panther.

I myself haven't seen the movie but after reading the book I have a pretty good idea of the storyline as it is quite descriptive and in depth being 48 pages long. I would recommend this to any boy who's a fan of the Avengers brand, young ones would love this book being read to them and older boys would be happy to read this on their own. I always find it hard to find books that boys are interested in and actually want to have read to them or to read themselves so this is perfect and at $12 I think this is very reasonable considering it's a Marvel branded product as they are usually very expensive. I can definitely see this being read in our house for a long time to come.

This book follows the story of the movie and is one of a series produced to accompany the release of the film. The books are targeted at different age groups; this one is suitable for ages six and upwards. My Mr Six is a good reader and enjoyed the book. I would think that in most cases, it would be more suited to children a year or two older than he is - especially if they wish to read it by themselves.

It is not so much a comic book as a storybook which has plenty of colourful illustrations, some presented in comic book format and others as full page illustrations. The illustrations are bright and not too complicated so that Mr Six could easily identify the different Avengers. He was able to read the text unaided with only occasional help from an adult. It is always a buzz for him when he can pick up a book and actually read and enjoy it on his own. There are some big words in the book, however, he has been keen as anything to read the text so he managed to figure things out for himself.

Personally, I am not an Avengers fan. I now have a six year old son and he can't get enough of superheroes, avengers and comic type stories. It is amazing how quickly he has become familiar with all the Avengers! He loved reading this book to me and with me. I guess I will have to put aside my desire to keep reading matter more innocent and less grown up as it is everywhere around him. If he doesn't get access to it at home, he finds similar books in the school library.

I asked Mr Six what he thought of the book and this is what he said: "I liked it when Captain America tries to get the brainwash out of Bucky Barns. I think the evil bits make book more exciting. It isn't really scary. I think the book would be for kids five or six and over. It would depend on how scared they are. If they are really scared about things they would probably have to wait until about seven."

I thought that the price is quite reasonable for a book based on a movie. Obviously this sort of book will sell alongside the movie release and this often pushes up the price of the associated products. Twelve dollars is an amount that a keen child could realistically save up for with pocket money and odd jobs around the house.

Mr Six has had several books in this series now, so he will be well prepared to enjoy the movie when he is a little older. One day, when he is older, he will be able to see it for himself, but he is still quite young so the books will have to do for now.

Loamhedge, the deserted Abbey, forgotten for countless seasons. What secrets do its ruins hold?
Martha Braebuck, a young haremaid, wheelchair-bound since infancy, wonders about a mysterious old poem relating to the ancient Abbey. Could it really be the key to her cure? But how could she get to this Loamhedge? As fate has it, two old warriors, travellers returning to Redwall Abbey, are inspired by the spirit of Martin the Warrior to quest ... more...