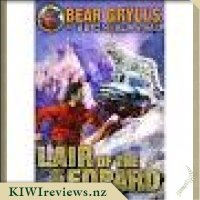 When teen adventurer Beck Granger is stranded on a Himalayan mountainside, he has to draw on all his strength and skill to survive.

As well as climbing and sheltering in some of the hardest terrain on earth, Beck also has to brave bear attacks and flash floods. But the biggest challenge of all is still ahead...... Can Beck finally learn the truth about his parents' dealths and bring their killers to justice?

Its been a long time since I read the last Mission Survival book and although I have been so excited to read it to find out what happened to Beck and to get some real answers regarding his parents I found this really hard to get into. Previously I have not been able to put the books down but with this one I found my mind wandering and could not fully engage with the book.

I am not sure if the style of writing has changed or maybe Bear Grylls is just trying to finish the series but I found the book rather rushed and feel it was not quite like the rest of the series. I enjoyed aspects of it and still learnt a bit especially if you are lost in the forest and mozzies are attacking you just find a pine tree and and pull the needles off and squish between your fingers it will let off a gooey substance that mozzies do not like. You do need to reply ever hour or so but what a fantastic tip. But over all I found it was kind of repetitive and didn't get me too excited.

I always felt his parents where going to be alive, so it was bitter sweet to find out about his mother but his father still has a question mark hanging over him. Yes they are saying he is dead and he probably is but I kind of always wanted that happy ever after ending.

I usually enjoy Bears writting style and love the fast pace of it but did not get that with this book. It had its moments but maybe the delay of over a year has just killed it or maybe Bear just ran out of ideas for the story but either way it was lacking something for me. I am glad I read it just wished it got me more excited like previous books.

But this time Pig - the world's greediest Pug - is telling great, big lies.

Won't he ever learn?!

The laugh-out-loud sequel to the best-selling PIG the PUG.