« Max And his Big Imagination: The Cave review 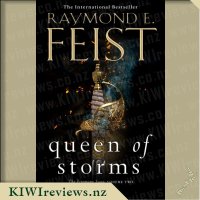 Disclosure StatementFULL DISCLOSURE: A number of units of this product have, at some time, been supplied to KIWIreviews by HarperCollins or their agents for the purposes of unbiased, independent reviews. No fee was accepted by KIWIreviews or the reviewers themselves - these are genuine, unpaid consumer reviews.
Available:
July 2020

But there is a great deal more to this bucolic scene than meets the eye. Both Hatu and Hava were raised on the secret island of Coaltachin, and though they may appear to be no more than a young couple in love, preparing for the midsummer festival where their friends Declan and Gwen will be wed, they are in fact assassins on a mission, awaiting instructions from their masters in the Kingdom of Night.

Moreover, Hatu is the last remaining member of the ruling family of Ithrace - the legendary Firemanes. He dyes his flaming red hair, and has studied to control his dangerous magical powers. But however hard Hatu may be hiding from all those who would seek to use or to destroy him, fate has other plans.

Horrific events are approaching Beran's Hill, bringing death and devastation to the peaceful town as unknown and monstrous forces are unleashed. And nothing will ever be the same again.

Having read the first book in the Firemane Saga (King of Ashes), I was looking forward to reading the second in the series. Although this book can stand alone as a solid story in its own right, I found it helpful that I was already familiar with most of the main characters. This time round the individual stories of the different characters were more integrated, making it easier to follow the plot and to spot the links between each one's progress. By the time I had read the last page, I was wondering how long it would be before the third (and presumably final) book in the series would appear as I wanted to know what the outcome might be.

I enjoy the way the fantastical elements are woven into the story, at times so subtle that they seem to be an extension of reality rather than a suspension. It is easy to accept the quasi-supernatural powers of the main protagonists, powers that surface at times of need, because they are presented as part of the normal adventuring. Some of the fight sequences would translate well to graphic novel format, and would certainly be a hit in the world of VR gaming and 3D movies. Feist describes his characters so vividly that despite the lack of illustrations in the novel I had no problem visualising each to the point that I am convinced I would recognise them were I given a mug shot.

The character who really comes into her own in this book is Hava. Although the story has several protagonists, her story is the one which impresses the most - possibly because she is driven to achieve her goals and will stop at nothing to reach them. The others - Hatu and Declan - are also on their own journeys, but they are flawed characters who stop frequently to socialise, recover from injuries, and even share a joke. Hava is a machine in contrast; she knows where she is heading and nothing, human or otherwise, can stop her.

Other important characters in the first book reappear in this one, but to a lesser extent. I kept waiting for Donte to play a bigger part but he was relegated to a minor role. Nevertheless, the stage is set for his return in the third volume of the series where, presumably, he will regain the presence he had in the first. Daylon and Molly are also back - with Molly, in particular, taking a more active role as Hava's sidekick. And then there is a wealth of minor characters who pop in and out of the story, fleshing it out but not staying around long enough to become game changers.

The action is set against the mythical world of Garn. At the front of the book is a detailed map, necessary to chart the characters' movements from one country to the next. Because Garn consists of a series of islands, it is a given that ships play an important role in the story with a large part of the action unfolding at sea. Although there is no indication as to where Garn might be located, the names of both characters and places are a hotchpotch of Western European languages so I would imagine it as being somewhere in the North Atlantic. As for the era, I would see it as somewhere between the 14th and 17th centuries, a time when leaders lived in castles and fought their battles on horseback while common people lived in villages or the nearby countryside, earning a living by simple farming or following trades such as forging or brewing.

Whatever the time and place - and since this is a work of the imagination, they cannot realistically be defined - this is a story of high adventure. Lost love, invasions, piracy, warfare, looting, assassinations, betrayal, love, and even death all combine to make this a rip-roaring yarn which draws in the reader from the very start. Add to that mix a touch of fantasy and a fast-paced narrative and you have a book which is hard to put down. Feist is a master of entertainment who demands the reader's attention from start to finish. I can't wait for the third book in the saga.

The prospect of the Big Match draws in a street urchin with a wonderful ... more...