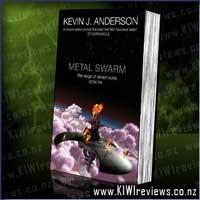 Disclosure StatementFULL DISCLOSURE: A number of units of this product have, at some time, been supplied to KIWIreviews by HarperCollins or their agents for the purposes of unbiased, independent reviews. No fee was accepted by KIWIreviews or the reviewers themselves - these are genuine, unpaid consumer reviews.
Available:
September 2007

The alien hydrogues have been defeated, driven back into the cores of their gas-giant planets by an alliance of the Earth Defence Forces, the ancient Ildiran Empire, the gypsy-like Roamer clans and fantasic water elemental beings as well as gigantic living 'treeships'. But as the various factions try to pick up the pieces and recover, the deep-seated wounds may be fatal. The Hansa's brutal Chairman Basil Wenceslas struggles to crush any resistance even as King Peter breaks away to form his own new Confederation among the green priests on Theroc, the Roamer clans and an ever-growing number of breakaway colonies who have declared their independence.

Like jackals smelling wounded prey, swarms of ancient black robots built by the lost insectoid Klikiss race continue their depredations on helpless worlds with stolen and heavily armed Earth battleships. A race of capricious and terrifying fiery elementals, the faeros, has joined with an Ildiran madman to declare war against all life. And the original, voracious Klikiss race - long thought to be extinct - have returned, intent on conquering their former worlds and willing to annihilate anyone who happens to be in the way.

There are authors out there who put a book out every year or so, and that's a good pace... then there are authors who should be chained to the desk and whipped while they churn out a book every 6-8 weeks, because they are just so addictive reading! For me, Kevin J. Anderson is one of those authors.

This book is the second-to-last in the Saga of Seven Suns, and it is amazingly suspensful... as books are, when they end with everything looking bleak for the good guys, and the bad guys seem to be on an unstoppable roll... -delighted shudder of anticipation- I *think* I know where salvation is going to come from, but the sheer scope of the troubles befalling the 'good guys' (aka those aligned with the Verdani Worldforest) is staggering, and could be leading me down a goose chase... ohhhh, sends chills down my back just thinking about what book 7 will reveal.

Overall, an excellent continuation of the saga, and well worth the read. If you haven't read this saga yet, go to your nearest library and grab book 1 and absorb some stunning space opera at it's most thrilling.

It's here that you'll find Flash and Sonny, Geronimo and Cheyenne, Jazz and Roxy: a jungle of operators while lives connect and collide, overlap and glance off one another. Drifters, surfers, taggers. The gangsters and the street kids, those who hunt and those who run: a jostling urban tribe fighting for turf.
K. Road unsettles with its urgent song: the sharp fear fuelling those close ... more...