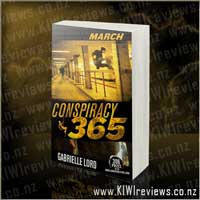 Disclosure StatementFULL DISCLOSURE: A number of units of this product have, at some time, been supplied to KIWIreviews by Scholastic (NZ) or their agents for the purposes of unbiased, independent reviews. No fee was accepted by KIWIreviews or the reviewers themselves - these are genuine, unpaid consumer reviews.
Available:
March 2010

The clock is ticking. Any second could be his last...

Yet another great book in this wonderful series for young readers, this books carries on from the previous two with the same action and suspense that we have come to expect from this series so far.

Once again Callum Ormond has to survive another gruelling month on the run trying to stay alive all the while trying to solve the Ormond Riddle and find out exactly what the Ormond Singularity is about.

This is a great series of books and is brilliant at introducing those younger readers into the joy of reading, my 9yo loves this series and as part of a nightly ritual a chapter is read to him each night and watch out anyone who misses a nightly read to him.

This series along with the 39 Clues series of books are his favourites and it's great to see him so interested in books (much like I was at his age, you know back when there were no DVD's and kids didn't have their own TV's)

Thanks to Scholastic, the explosive new Conspiracy 365 series has made it's way through the first two books, January and February, and now the third book has come. I think that this book was better than the last two books because it had more action in it.

Like the last book, the beginning of this book showed what had happened previously, which I found a really useful reminder considering book #2 came out back in February The book made me worried in some parts, relived in others, but most of the book made me feel aleart because it had lots of danger in it. Even though it was full of danger, I thought the book was quite cool and very active as action is my kind of thing. As usual, the book ended with such a big bang that I can't wait to read the next book to find out how everything turns out.

Out of all parts of the book that made me feel worried, the biggest part was when Callum got bitten by a poisonous snake while trying to escape a couple of thugs that worked for one of Cal's biggest enemies. However, I was glad when Cal was able to save himself at the last minute because I thought it would have been rather unfortunate if he died.I think this book is easy to read and I hope that the series will get better because it is turning out to be a great success.

I have read the previous two books and the 'March edition' continues the story in an action-packed fashion with trains, snakes and black-belt homeless guys. It was a pretty fast read. Being a story that is spaced out over twelve months however, I often feel like we're not making all that much progress. All the puzzles remain just as unsolved as in the previous instalment, though there is one discovery near the end of this book that should make the next one quite interesting and the cliff-hanger ending seems much more convincing.

I do love Cal's ever loyal friend Bodges, who risks much (including jail time) to help Cal out of sticky situations. The girl, Winter, on the other hand is a bit of a mystery. More involvement from her would probably make this series appeal a bit more to girls.

All in all, a great read for teens, especially boys. I will definitely be up for reading the 'April' book.

Having read the previous two titles, it was good to catch up with young Cal again, as he continues his perilous adventure to not only stay alive for 1 year while on the run, but also solve the riddle his father left for him just before he died, unable to communicate clearly due to brain damage. (Medically termed a condition of Aphasia). As if that isn't enough, he has been framed for assaulting his devious Uncle and putting his little sister in a coma.

This book opens where #2 left off, with Cal trapped in an underground rail tunnel, a train rushing towards him like Death himself is driving it. A sudden reversal of fate saves Cal's life... (Funny that) and sets him down another track that leads towards an amazing achievement in the face of adversity.

When the whole world seems hell-bent on capturing him, Cal has many supporters, but few real friends willing to risk it all to help him survive. Aided only by his best friend Boges, with some occasional support from some unexpected 'fellow social outcasts' Repro and Winter, Cal continues trying to find out what the 'Ormond Singularity' is, how it ties in with the 'Ormond Riddle', why his father died, why he is a target marked for death, and why the world appears to have gone crazy with him right slap bang in the middle.

Overall, this is another exciting addition to the franchise. Aimed at the youth market, it is a casual afternoon read for an accomplished adult, a weekend time-passer for kids aged in the double-digits, and probably a great way to enthuse your pre-10's to improve their reading skills. There's no graphic violence, few really scary moments, but plenty of action, thrills and spills, so it should be safe enough to be read to the really young ones, whether they really understand it or not. Roll on the rest of the series.

A life on the line.

When seven members of his family were kidnapped by the Vespers, thirteen-year-old Dan Cahill knew he was in for the fight of his life. He knew he was up against an impossibly powerful enemy. And Dan knew the odds were that some of his family members wouldn't make it.

But even as Dan steels himself to accept these facts, the unthinkable happens. The Vespers capture a blameless bystander - Dan's best ... more...