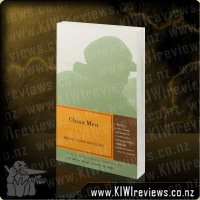 The author chronicles the lives of three generations of Chinese men in America.

Woven from memory, myth, and fact - a journey into the hearts and minds of Chinese men in America: the grandfather who slaved in the Sierra Nevadas on the transcontinental railroad; the father who danced down Fifth Avenue, like Fred Astaire, on days off from the laundry; and the son who returned to China to find release from his dead mother's angry spirit. Here is an accomplished storyteller's remarkably beautiful tale of what they endured in a strange new land.

This is a fantastic book written in post modern style. Maxine is an incredibly talented Chinese American women that broke the boundaries with her writing in America in the 1980's. If you ever get a chance to see an interview with her, it is well worth the look! Her book The Women Warrior is the first book in this sort of two part series, although they can be read apart and it doesn't effect either book.

They books layout at first appears to be confusing, there are bold 'stories' and italicized 'stories' the bold ones are those of Kingston's family, and are read as 'truth' or near truths, whilst the italicized ones are myths and traditional Chinese tales. The book is really interesting for the fact it gives great perspective on Chinese American and the harsh reality of immigrations and the persecution that the Chinese went though, even once in America.

The book is beautifully constructed and well laid out once you understand her method in reproducing the tales. I found i really enjoyed the ancestral tales and the Chinese tales seemed to drag the story on, but in looking at the book as a whole, you couldn't have one without the other. The characters tend to become confusing as there are lots of fathers, grandfathers and great grandfathers and so on, but i believe that Maxine has done this is it is slightly anonymous and for people to be able to imagine their family's in their place, or something a long those lines.

Score: 9.3
Product reviews for listing 8277: The Garden of Lost and Found -  Written by Harriet Evans

Nightingale House was the Horner family's beloved home - a gem of design created to inspire happiness - and it was here Ned painted TheGarden of Lost and Found, capturing his children on a perfect day, playing in the rambling Eden he and ... more...