« Back To School Tortoise review 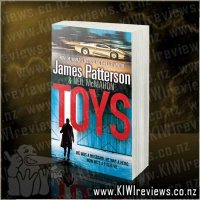 In the future, humans will no longer rule the world. Elites have taken control of civilised society; humans exist merely to serve. Elites are genetically modified, technologically enhanced versions of humankind. Originally designed and created by man, they were intended to save humanity. Instead, they have slowly usurped humans from leadership and have made them their subjects.

Animosity between Elites and humans is fierce, and many rebels fight back against Elite rule. Hays Baker is a high-ranking agent in the Elite forces and at the forefront of keeping the humans under control. However, Hays is unknowingly hiding a secret that will make him the greatest threat to the Elite regime, and their number one target.

Now hunted by the people he used to work alongside, Hays searches for the truth of his identity. But to understand this he must first learn of a greater truth, hidden within the rule of the Elite.

I absolutely love James Patterson, not only has he branched out in the genres that he writes in, his books are all easy to read and so hard to put down. I read this book in two days - was a 'I can't put it down at all' book.

Not only is this book based on a future that could very really happen, it is also realistic in the story-line. The elites have saved the world from the humans who nearly destroyed it but then in return the elites were so over-compensating and powerful that they are about to destroy the world themselves.

This book includes toys for kids that can walk and talk, helmets you can put on your head and escape to wherever you want and androids that clean your house for you. But these are not available to us humans, these are for elites only...humans live in slums on the outskirts of town, they are disgusting, simple beings who ruined the world...or are they? The elites are robotic in a sense, they are not creative and therefore humans still do a lot of the work..

Where does Hays Baker fit in? Is he an elite or a human? I wouldn't want to ruin the story.

In 1817, a young Mary Shelley wrote a tale that strikes a similar chord... a tale called "A Modern Prometheus", but we all know it simply as "Frankenstein". This story carries a similar message... in an effort to improve itself, mankind created the Elites... a blend of enhanced genetics, eugenics and cybernetics. However, just as the 'Frankenstein' story goes, the created soon turn on the creators, in this case setting them as second-class citizens, little more than indentured slaves.

The characters in this tale are well defined, both in current tense, but also carrying enough of a background to have depth and clear motivation for their actions and quests. The double-cross in the plot is skilfully done, though I have to say somewhat less than unpredictable.

Overall, despite his prolific literary career, this is the first "James Patterson" title I have ever read in book form, and I have to say I am not 100% sure if he should have branched out into sci-fi... from what I have heard, and the movie adaptations of some of his "Alex Cross" novels, I think Patterson's greatest strength lies in the thriller and crime drama genre. Despite this, it was a very enjoyable read... at 364 pages, it was over in a single day of dedicated reading... so though my pronouncement is that this book was lacking in areas I consider key to a good sci-fi novel, it was certainly a page turner... I am just at a total loss to explain why. Some things just don't need explaining.

Row, kiwi, row your boat, out from the wooden pier.
Come hunting for a taniwha, we're sure there's one round here.

This is a story about making new friends. Join the fun as three cheeky kiwi set out on a rowboat adventure to find a new friend - KA PAI! Children will enjoy spotting the cheeky, playful taniwha hidden in the illustrations.

Includes bonus CD by iconic New Zealand entertainer Pio Terei, with lyrics in both English and Maori. There is also a guitar-only version so children can sing by themselves.