« The Raven and Other Tales review

Spirit Animals - Fall of the Beasts #3: The Return review 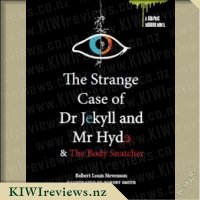 During the years when I was growing up, Classics Illustrated was a series of comic books popular among children of all ages. Original stories were retold in comic strip format, condensed so that younger readers could get an easy introduction to the original in a way that was accessible to them. At one stage I owned every one of them, thanks to my uncle who had collected them and then passed them down to me; had I held on to them, they would be worth a fortune now! The modern Graphic Novel is a direct descendant of these early newsprint editions with their lurid and very basic colours, but nowadays it appears properly bound and in book format - thus ensuring that the book will last!

Stevenson is a great storyteller. His yarns continue to rank among the most popular even today, but some of the settings and the language used can pose a challenge to the modern reader. This edition captures the feel of the original while presenting both tales in a new and attractive format. I was impressed that the artist first constructed a virtual set for the Jekyll house in order to ensure the authenticity of the angles in the drawings. I love the Victorian feel of the book, from the illustrations themselves to the bookplate at the start, and the uncluttered fonts that ensure that the words are legible even when they are seen against a low contrast background.

Both stories have that wonderful Gothic feel with their very slightly improbable plots and unbelievably ugly antiheroes and corpses. These are definitely not suitable for younger children; I can imagine that they would be nightmare material for many little ones. For teenagers, however, they have a ghoulish appeal at a time when there is an abundance of stories of werewolves, vampires, and other undesirables who are made newly fashionable through media representation via novels and films.

I tested the book out on two of my older students (aged 16 and 17). They had finished their homework and, spotting the book on my desk, asked if they could borrow it. Miss 16 brought it back after five days and said she had found it quite easy to read although she does not usually go for that genre. She assured me it was ok, but personally she would not buy it.

Miss 17 was more forthcoming. She saw that Miss 16 had returned it, so asked if she could borrow it too. Next day, when she returned it, she said she had read it twice as it was a quick read. She preferred the first story to the second as it had a more detailed plot, but she thought the artwork in both stories was superb. She commented that there was just the right balance between text and graphics and would be interested in reading more in the series if I had any. I told her I still had a second book in the series to review and she could certainly read that too and give me her impression.

For myself, I thought the book was a high quality presentation and can see it encouraging youngsters to go on to reading the full version just as the old Classics Illustrated did for me. But even if they don't progress to the original version, they have a pathway to the classics which can only enhance their general literary knowledge. Personally, I will be looking out for the next publication in the series.

But one night a stranger presents a different kind of telescope for Galileo to look ... more...