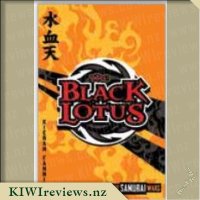 Ghost, Cormac and Kate are junior recruits of the Black Lotus, a school for ninjas. When a powerful weapon is stolen, the three must battle through 16th century Japan and present day New York to stop a power hungry shogun from destroying the city.

I thought my teenage boy, who loves to read, would really enjoy The Black Lotus, but to be honest it took him a while to really get into it. He can usually pick up a novel and finish it with a day or two. This one took much longer, to the point where I was saying 'come on son, we need to finish this so we can review it'. Once his interest was peaked though, he was able to finish the book in one sitting. And at the end, did say that he actually quite enjoyed it, and would possibly read it again as second time around it would likely be much better.

So the basic concept is, three teenagers with super powers join together to fight evil. That is pretty much the jist of it. For most teenagers that is all a book need: super powers, weapons, fighting lol but my son said there was to much use of the super powers, and it was this that made it hard for him to want to read. I did not know it was possible for there to be to much super power in one book haha

The price is possibly more than I would usually pay for a book that does not seem to catch attention at first glance. To be honest, it would be passed over in a book shop because there is nothing really on the cover that grabs the eye and makes you want to check what it is about or gives any indication on the story line.

All n all it was an okay read I thought, I mean I do find time travel quite interesting lol but sadly not a favourite, and no real desire to see any sequels either. Maybe like zombies, we have just had an over load of super heros, superpowers and mystical and are looking for more practical real reads

This book reminded me of some of the James Bond series in many ways. There were the fast pace, the action-packed chases, the issue of advanced gadgets to operatives. But the similarity ended there. This story crosses genres from goodies-vs-baddies adventure story to hi-tech science fiction through to fantasy.

Having special powers is a hallmark of the hero or heroine of the old comic books, now more commonly referred to as graphic novels. Wonder Woman, Superman, Spiderman, The Hulk, and many other similar fictitious characters are the inspiration for Ghost, Cormac and Kate. Each of them has his or her own special ability, and it is because of this that they are charged with the task of retrieving the moon sword and saving the city of New York from annihilation.

There is an interesting intertwining of cultural and ethnic variables in this story. Although the Japanese culture of the 16th century is predominant, Brazil, Ireland and the USA, the countries of origin of the three trainee ninjas, are also important in setting the background. There is a Japanese-English glossary at the end of the book which includes translations of most of the words used, but the odd Portuguese word which is also used is not translated. The expectation appears to be that the reader will understand the meaning through the context.

I can see teenagers identifying with the three main protagonists. Despite their unique abilities, they are quite credible as they talk and act exactly as modern teenagers all over the world do. I liked the way the author has deliberately included ethnic diversity in the story, and has balanced the evil Samurai with the good. When I first started reading, I thought the story was going to be racist, but this proved to be false. Once I got into the book, I found that I was hooked. Now I am looking forward to the promised sequel to see what happens next!

In the decades since, Craig Potton has become one of New Zealand's most ... more...