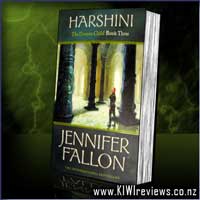 Medalon has surrendered to Karien and Tarja is once more an outlaw The Defenders are scattered and their only hope for aid is Damin Wolfblade and the vast army of Hythria.

But Damin has his own problems. The High Prince is dead and he must fight off a usurper to secure his throne and lift the siege on his capital, before he can think of aiding Medalon.

R'shiel has finally accepted her destiny, and is searching for answers. But time is running out. The Harshini king is weakening and cannot hide Sanctuary for much longer. She must defeat Xaphista soon, or the Harshini will be destroyed.

With no idea how to defeat a God, her quest takes her across Medalon to Hythria, then Fardohnya and finally back to the Citadel.

But before she can confront Xaphista, she must find a way to weaken the Overlord's growing power, somehow bring peace to the divided southern nations, free Medalon from Karien occupation and find the strength to finally put an end to Loclon.

Unlikely relationships are formed in the final of Fallon's Demon Child trilogy - Harshini as events take the last few steps towards the dramatic finale. Again I was hooked from the first chapter, unable to put the book down as R'shiel finally takes hold of her destiny and learns, rather rapidly and violently, to run with it, full tilt. Questions created from the previous two books are now answered and countries are united against a common enemy, plus Loclon gets what he deserves- at long last. False love is released as new love grows strong, while Xaphista becomes bold and starts to make his presence felt and heard. All of this, and of course a lot more, lead to it being a great end to the trilogy, and it was with much regret that I read the last page and then had to close the book on this particular story for good (unless I go and reread the books that is). Although the actual trilogy was well concluded, it did leave it open for more books in the future, which I am now dearly hoping for, as Demon Child has now firmly placed Fallon in amongst my top 10 fantasy Authors.

When elderly Morey Gilbert is found lying dead in the grass by his wife, Lily, it's a tragedy, but it shouldn't have been a shock - old people die. But when she finds a bullet-hole in his skull, the blood washed away by heavy rain, sadness turns to fear. It looks like an execution... and soon a whole city is fearful as new victims are found killed with the same cold precision. All elderly. All apparently blameless.