« Defender of the Realm review

ProdID: 7185 - The Raven and Other Tales
Author: Edgar Allan Poe 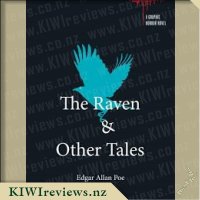 The Raven and Other Tales product reviews

In this graphic adaptation of Edgar Allan Poe's works, the celebrated narrative poem The Raven and several of his short stories are brought to life by Pete Katz's superbly dark illustrations. Poe was a master of Gothic fiction, and the genre's core themes of horror, death and romance feature strongly in this collection, which includes The Raven, The Fall of the House of Usher, The Masque of the Red Death, The Black Cat, The System of Doctor Tarr and Professor Fether.

As a long-time fan of Edgar Allan Poe's writing and an avid reader of Gothic literature generally, I welcomed the opportunity to see what a graphic novelist could do with some of his works. This edition contains edited versions of five of his creations - one poem ("The Raven"), and four short stories. As I did with the previous book in this series, I passed it on to one of my students (aged 17) for a second opinion from the point of view of a teenager. Unlike me, she was not familiar with Poe's works, so this was to be her introduction.

I liked the way that the book opened with the "Dramatis Personae" that included an image of the main protagonists in each story. Miss 17 commented on this too as she found it useful to refer back to as she was reading - particularly the third and fifth stories, where there were multiple minor characters. She also appreciated the definition of Gothic literature which appeared in the introduction. All too often there is an assumption that younger readers know what this is!

I was pleased to find that "The Raven" was quoted almost in its entirety, with only an occasional edit. This meant it preserved the character and the rhyme of the original. The sequence where The Man is staring at the portrait of his dead wife and watching it morph into a ghost (through the double vision effect) is brilliant - it conveys the progress of The Man as he slowly descends into madness with just a few accompanying words.

The first of the four short stories, "The Fall of the House of Usher", features a wonderful full-page illustration of the House early on in the narrative. This is a pseudo-Gothic "castle" complete with turrets and porte-cochere, set in what looks to be a stagnant lake rather than a moat. Dead trees and storm clouds feature large; The Friend sits on his horse in the foreground, surveying the House from a distance. This image is brilliant. It sets the scene for the last two pages of the story where the destruction of the house is portrayed entirely through a sequence of graphics. Miss 17 could not stop talking about it; of the five works, this was her favourite, and through the quality of the pictures she was able to pick up on the mood of the story without difficulty.


"The Masque of the Red Death" is the third work in this volume. Miss 17 was instantly intrigued to read that "blood was its avatar". She had thought that "avatar" was a modern word that related to online activity and virtual reality, and was surprised to learn that it had another, older meaning. Understanding this word is in fact crucial to understanding the story, so it is useful that the first lines of the original were included unedited. The graphics for this story are especially detailed and totally unsuitable for younger children; for teenagers, however, they are great as they capture the horror of the disease. Miss 17 thought it was about Ebola and was amazed to find that Poe's works were written long before the Ebola virus was identified.

The fourth story, "The Black Cat", is an interesting study of an animal causing a villain's downfall. This sparked an interesting discussion between Miss 17 and me as, although the ending is predictable, it is probable that all short stories written on this theme were possibly inspired by Poe's original. Once again, the graphics were superb - particularly the opening image of Newgate Prison, and, later in the story, the close-up of the one-eyed cat who is named after the original Pluto, ruler of the underworld.

The last story, "The System of Doctor Tarr and Professor Fether", is fairly predictable and is probably my least favourite of the five. It is more of a psychological thriller than a true Gothic creation, although the graphics are just as effective as in the previous four. Miss 17's comment was that she had worked out the ending by the fifth page so the suspense created by the previous works was just not there.

I felt overall that for me this book was a complete success. It did what it set out to do - make the classics accessible to a new generation, and inspire them to go back to the originals. Miss 17 said she had learned several new things from reading the book, and had really enjoyed the chance to do so. The presentation is professional and the compact size of the book means it is easy to carry in a backpack or schoolbag. I look forward to the next publication in the series.

Score: 9.3
Product reviews for listing 3228: The Art of The Hobbit -  Written by J.R.R. Tolkien, Wayne G. Hammond and Christina Scull

To celebrate the 75th Anniversary of the publication of The Hobbit, a sumptuous full colour art book containing the complete collection of more than 100 Hobbit sketches, drawings, paintings and maps by J.R.R. Tolkien.

When J.R.R. Tolkien wrote The Hobbit, he was already an accomplished amateur artist, and drew illustrations for his book while it was still in manuscript. The Hobbit as first printed had ten black and white pictures, two ... more...