Sherlock : The Game where Memory and Deduction are Elementary review 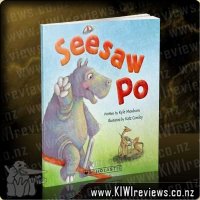 Disclosure StatementFULL DISCLOSURE: A number of units of this product have, at some time, been supplied to KIWIreviews by Scholastic (NZ) or their agents for the purposes of unbiased, independent reviews. No fee was accepted by KIWIreviews or the reviewers themselves - these are genuine, unpaid consumer reviews.
Available:
at selected quality retailers

A group of four animal friends go to the playground to have fun on the swing, the slide, the roundabout and the seesaw. Upon arriving at the swing, they notice an ant sitting on it. 'Shoo, ant!' they say, but Po (the hippo) says no, he was there first and gives him a push.

Then all the friends have a turn - but when Po gets on, the swing refuses to budge. Then he gets stuck on the slide, and stops the roundabout. And as for the seesaw... The other three friends head off home and Po sits disconsolately on the seesaw... and then an amazing thing happens...

Another fantastic book by local Kyle Mewburn. This is a neat wee story or what goes around comes around ... especially in the playground! Po sticks up for the any who was on the swing first ... but when Po's turn comes to use the swing and other equipment he cant .. he's too heavy! The ants end up saving the day in a very very cute, clear and ingenious way!

The book is produced with excellent quality, i love the colour and the cover page feels lovely, its very matt and the title is textured, i really love this in a book...although i recently learned with another Mewburn book 'Melu' not to judge a book by its cover!

The illustrations by Katz Cowley invite young children to want to read, they are fun and lively. The words sprawl across the page, inviting the reader to express them as they look - another feature I love in picture books! The book itself isn't too long, which is great for quick bed time story for my 3 year old, or as a time filler while waiting for something.

The price of $19.50 fits the quality of this product. I would recommend it to buy for preschool aged children 10/10 from me on this!