Star Wars : episode 3 - The Revenge of the Sith review 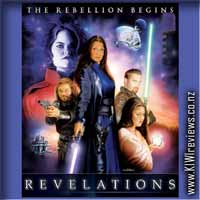 Intro:
Revelations was started with a hope and desire to create a low-budget independent film with a big-budget production value. With affordable technology and a pool of talented artists around the world, Panic Struck Productions wanted to see how far they could take it. Everyone involved in the film is a volunteer and no one was paid to work or be involved in this project. The film is a combined effort to artists, industry professionals, and fans, all working together in a dedicated effort to produce a high-end film.

First off, "Revelations" is a non-profit film. That's right, they cannot make money from "Revelations". Star Wars is a registered trademark of Lucas Film Ltd. and it is through George Lucas' kindness he allows young film-makers to play in his wonderful world as long as no-one profits from it. Being huge fans themselves Panic Struck Productions would want, if anything, to promote and share the magic and love of the Star Wars films and what it's creator brought to the industry and audiences around the world.

Revelations will be FREE for everyone to download (and hopefully enjoy) here online.

A little on the story:
Revelations takes place between Episodes 3 and 4 of the Star Wars Saga. Emperor Palpatine's power has spread throughout the galaxy. Darth Vader is a feared figure. The Jedi are hunted fugitives. Anyone suspected of harboring Jedi or having any information about them is taken into Imperial custody.

The heroine, Taryn Anwar, has broken way from Imperial control and is searching for an ancient Jedi artifact. Said to contain great power, it could be the key to destroying the Empire -- if she can locate it before Zhanna, the Emperor's Hand, does. It's a race between good and evil as the fate of the galaxy hangs in the balance.

Revelations tells it's story around it's own unique characters and worlds around the Star Wars universe in which the only original star wars characters you will see from the films are, the Emperor, Vader, stormtroopers, and various aliens that makes Star Wars. "Revelations" is very unique in it own way of look and feel, yet still within the Star Wars galaxy.

I would not call myself a "Star Wars Nut", but I do enjoy any good Sci-Fi movies that have had thought put into them, a reasonable result for their budget, and most of the continuity errors cleaned up before it goes out to view. That means there are a lot of big-budget films out there that are just a waste of my time. And small-budget films just leave me with cold sweats.

This is not a big-budget film. Nor was it a waste of my time. It was far from it, almost to the point where I would love to see a follow-up done with a proper film studio getting on board and giving these talented fans some serious money and saying "Go to it guys, we know you can make another winner!" Move over George Lucas, I think young Shane Felux is after your place in Star Wars history.

Hey Shane, get to work man, make some more! I'd love to see what happens next.

Since I DID have to pay to see this, in terms of Pay-by-Traffic ISP charges, I was more than happy to fork over the $5 it cost me... I can only wish I could afford to download a better resolution version available that I could have burned to DVD and made a suitable cover for it... it would have had a place of Supreme Honour on my Sci-Fi shelves. However, at 3.5gig and up, the really good quality versions are a little out of my reach at present.

Since this ties into the SW Universe only in a side-issue kind of way, and doesn't really follow in the "Saga of Anakin Skywalker" storyline, it makes it difficult to compare it to the other SW movies... so I won't. I will simply say that this movie gives you insights into the rest of the SW universe, and allows you to get another small glimpse of 'the big picture' of which Anakin/Vader is just another part.

Overall, a stunning and truely wonderful addition to the SW sagas, and one I will be keeping in a safe place for repeated viewings for many years to come. And be sure to pay close attention to the end credits... you might just appreciate how much effort went into this movie by a dedicated core of fans, when you notice the same names popping up in many, MANY places.

Okay so the 'Pay to see ti again' option isn't really applicable here, but I would certainly pay money to see this film.

Wow! I have seen many Star Wars fan film and honestly most of them sucked, with a couple of notable exceptions, Troops by Kevin Rubio and Broken Allegience by Nick Hallarn, but this one brings a whole new level to the Star Wars fan films genre.

Whilst the acting is not as good as in the large commercial films it is still relatively good acting. They do manage to convey a sense of realisim to it, and the fact that they are all fans of George Lucas' work definately works to their advantage in this one.

The soundtrack in this is on par with anything that John Williams could conceive of, and done with signficantly less people (not that i'm suggesting we could do it all without an orchestra now.)

And those special effects are almost as good as anything a major Visual Effects company could do on a modest budget, and once again these were all done at no cost to anyone, they were all done by volunteers.

to the team at Panic Struck Productions. Looking forward to seeing what else you throw our way.