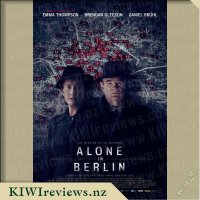 Based on the international best-seller by Hans Fallada, ALONE IN BERLIN shines the light on two ordinary German people who made an extraordinary impact.

Berlin, 1940. Working class couple Otto and Anna Quangel (Brendan Gleeson and Emma Thompson) receive the news that their only son has been killed on the battlefield. Already disillusioned with The Führer and The Fatherland, the loss of their son proves the tipping point and Otto begins a campaign of civil disobedience.

At the head of the Gestapo force trying to track down the dissenters is Escherich (Daniel Bruhl) who faces enormous pressure to find, stop, and bring the traitors to justice.

I was fairly certain that this would be a quality movie when I saw that the two main characters were played by Emma Thompson and Brendan Gleeson - both artists in their own right. I lived in Ireland for some time and of course Brendan Gleeson is a big name there - he started his career in Dublin and I don't think he has ever been out of work. Emma Thompson is another amazing actor, and her makeup was so authentic that I did not recognise her in her first scene!

It is interesting to see a different perspective on German life during the Second World War. When I grew up it was the era of screen cowboys-and-Indians where the Indians were always the baddies. Then things became more PC and suddenly westerns were about First Nations and Native Americans in a belated attempt to portray a more equal view of American society. But war films have always lagged behind; in Hollywood, Germans were all portrayed as The Enemy, and until recently this is what you expected to see on the screen.

It is refreshing, therefore, to see a film about a Germany made up of Germans, with all the diverse characters you will find in a small society. The Nazis are there, but the film takes pains to emphasise that while all the Nazis are (presumably) German, not all the Germans are Nazis. In fact, most of them are not. In the time and place the film is set, however, it is dangerous for anyone to speak up against the regime, so a large number of people keep to themselves and just try to stay out of the spotlight.

The main protagonists, Otto and Anna Quangel, have lost a son - in common with many families who lost sons in battle. Some lost more than one, and many of those who died were barely more than children. The Quangels are stunned by their loss, but before long their grief turns to quiet anger. If Facebook had been invented then, their subsequent attack on the system would have gone viral within hours. But this was still the age of the telegram and the postcard, so they had to make do with the technology available to them.

The story is all the more poignant because it is based on fact. It celebrates the courage of two people - initially Otto, and then his wife Anna as well, in standing up for all those others who had lost children through the horror of a war which was being waged for reasons beyond the comprehension of ordinary people. Wartime Berlin is portrayed as a bleak, colourless place where luxuries are few and the dominant mood is oppressive and dull.

What was refreshing about this film was the calibre of the acting and the underlying message that there is good in everyone, and that it is important not to make summary judgements based on preconceptions. Nothing could be further from a conventional hero than Otto Quangel, but it is precisely his very ordinary appearance that allows him to blend in and spread the message for so long without being caught. The word "Alone" in the title implies that the Quangels are very much alone in their mission, without the chance of being rescued if they are to be discovered.

This is not a film for children; not only is the message quite subtle, but the European cinematic style relies strongly on brooding artistic shots, juxtaposition of similar building facades, and long shots of various street scenes. For young viewers this can be tedious as they do not have the experience or the patience to accept a slower pace, used as they are to the urgency of modern living. Time seems to stand still in films made in the European style; there is none of that frenetic action that is common to both the British and the American film studios. But for the adult viewer who has the maturity to enjoy a movie like this, the effect in this film is seductive, simultaneously sad and inspiring.

Starring Brendan Gleeson (who has had roles in such films as Braveheart, Gangs of New York, and the Harry Potter and Mission Impossible franchises) in the role of Otto Quangel, and his wife Anna is played by Emma Thompson (known from such films as Sense and Sensibility, Love Actually, and also had a role in the Harry Potter franchise), the main cast is capped off by Daniel Brühl (Inglorious Basterds, Rush, Bourne Ultimatum, and most recently Marvel's Captain America 3: Civil War) who is cast as Escherich, a Police Inspector. With such well established names, one would expect a rather thrilling drama.

Ultimately, this film is heartbreaking. Set in the centre of mid-World War II Germany, we have the story of a disenfranchised couple attempting to spark a revolution against the Nazi regime. The scenery and environment are beautifully created, with a yellowed tone that provides a period aura to the film, and gives that little bit more authenticity.

Emotion is something that was not so easy to come by in the film. Seesawing between apathy and a quiet sadness, there were very few visible or public examples of grief or anger. While it did help portray the effects of police brutality in Nazi Germany, and the notion that everyone is being watched (which was specifically mentioned several times throughout the film), it did stifle the film somewhat, and made it that little bit harder to empathise with the protagonists; who I knew I should want to succeed, but felt that they didn't really care about the results themselves.

Escherich was really the only source of movement in this incredibly slow game of cat and mouse. It was good to see some good detective work used in his quest to track the "Hobgoblins", but you couldn't help but think that there were some obvious plot holes and investigative points that he could have followed up that would have got a result sooner. His role was not engaging; while the Quangel's were dull, they gave the impression of parents who had lost purpose, and were unaffected by the potential negative consequences of their actions. Escherich was just too fresh-faced for this film. He looked like a boy with no experience who had no place in the position he was in.

The most engaging part of the film comes towards the end. Stuck between a rock and a hard place, Otto is faced with a difficult decision that changes the direction of the film, and leaves the audience wondering what will happen. As 'Alone in Berlin' is based on a fictional novel, so whether they follow in the footsteps of Otto and Elise Hampel (their real-life counterparts) is constantly in the mind of the viewer. Event after event hits, with difficult decision after difficult decision to be made by the main cast, and despite some off screen implied consequences, the film provides the protagonist with a result even if it was posthumously.

Overall, I enjoyed it. It was much slower than a usual Hollywood-type film, and it helped build the tension without the need for over-exaggerated danger and action. Everything happens small, but it all had a meaning, and I feel I have learned something from the German point of view that isn't often talked about. Worth a watch.

Man of Tai Chi is a 2013 Chinese-American martial arts action film on DVD, directed by and starring Keanu Reeves - a multilingual movie partly inspired by the life of Reeves' friend, stuntman Tiger Chen.

Tiger Chen is a Tai Chi student who is rather rebellious and uses Tai Chi to fight despite his master's concerns. When the temple where he studies get threatened from modern redevelopment, he fights in an underground fight club to get the money the temple needs. However he soon realizes that his employer has other, more sinister, motives.