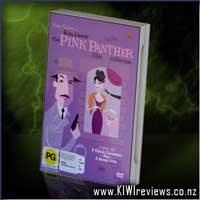 • The Pink Panther: Starring: Claudia Cardinale, David Niven. Living at a posh resort with her precious "panther" - a large gem with the image of a leaping feline inside - sexy Princess Dala meets the debonair Sir Charles. She is unaware, however, that Charles, a.k.a. "The Phantom," is a professional thief who steals from the rich and gives to...himself! Enter Jacques Clouseau, the clumsiest Inspector ever to trip over a vase. Can he stop Charles' attempts to relieve the princess of her diamond? Can he even exit a room without breaking off the doorknob? Or will The Phantom steal away the "cat" and leave Clouseau to hold the bag?

• A Shot In The Dark: Starring: Elke Sommer. The French have a word for a man like Clouseau: Idiot! Across Paris, baffled citizens want to know if the Inspector is in hot pursuit of a criminal... or just in love with one! Mistakenly assigned to a high-prestige case in which a millionaire's chauffer has been murdered, Clouseau finds himself falling (literally) for the prime suspect - a beautiful parlourmaid whose talent for being in the wrong place at the wrong time is almost as great as his. But as the body count grows higher, and the parlourmaid's criminal record grows longer, Clouseau realizes he'll have to find the "real" culprit quickly - or his career will be finit!

• The Pink Panther Strikes Again: Starring: Herbert Lom, Colin Blakely, Lesley Anne-Down, Omar Sharif. "Give me ten men like Clouseau, and I could destroy the world," said Inspector Dreyfus in A Shot In The Dark. But in The Pink Panther Strikes Again, he actually tries! Driven mad by Clouseau's incompetence, Dreyfus commandeers a doomsday device and threatens global destruction. His only demand? Clouseau's death. The world community's response? "No problem!" But Clouseau's dumb luck serves him so well that the 26 assassins hired to kill him can't manage - though he may do the trick himself by tripping over his own two feet!

• Revenge Of The Pink Panther: Starring: Robert Webber, Herbert Lom, Dyan Cannon.
The world believes that Clouseau (Sellers) has become the victim of Douvier, a drug lord who has just blown the hapless inspector's home into a million pieces. At the funeral, Inspector Dreyfus performs the eulogy with tears in his eyes - from attempting to suppress his happiness! But it's Clouseau who has the last laugh. Very much alive, he has headed for Hong Kong with the drug lord's discarded mistress to investigate Douvier and a heroin deal worth 50 million francs. But can Clouseau, disguised as the Godfather, intercept the deal? Will Inspector Dreyfus, who's also on the case, see past the disguise in time to avoid killing his subordinate... or will he just kill him anyway?

• Trail Of The Pink Panther: Starring: Herbert Lom, David Niven, Joanna Lumley, Richard Mulligan. When Clouseau's plane is reported missing, his long-suffering nemesis Dreyfus has an odd way of grieving him: he simply can't stop laughing! But when a reporter attempts to memorialize the crime-fighting hero, she comes up against not just a gloating Dreyfus but Clouseau's ex-wife, the notorious Phantom and even his lustful lush of a father!

To anyone put off seeing the Pink Panther after seeing the recent Steve Martin travesty should take comfort from a bottle of beer (or two) and put on the originals. Nothing, I repeat, NOTHING can ever, or will ever, compare with the Blake Edwards scripts and Peter Sellers interpretation of the inept French detective.

Despite the oldest film in the set being over forty years old,it loses none of its charm and appeal and with absolute certainty, it will appeal with the many fans of Pink Panther. I'm sure with this release, it will gather a new army of fans from the younger generations.

Each film gets funnier than the previous film because Clouseau's character develops into his final and polished form. Some Pink Panther fans rate A Shot in the Dark to be the best film, However, for sheer comedy The Pink Panther Strikes Again makes me laugh every time. I enjoy these films and cannot wait to introduce my daughter to the sheer unadulterated comedy of Sellers as Clouseau.

Five films are included in this set, and another disk packed full of features (including cartoons, trivia and documentaries on Edwards, Sellers and many others who have been associated with the Pink Panther since it inceptions.

You will even find out who was originally chosen to play Clouseau and dropped out shortly before filming, leaving Sellers to rise to meteoric stardom, and into a role that can only be associated with Sellers.

An absolute must in any collection.