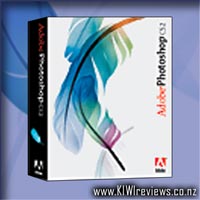 Disclosure StatementFULL DISCLOSURE: A number of units of this product have, at some time, been supplied to KIWIreviews by Adobe or their agents for the purposes of unbiased, independent reviews. No fee was accepted by KIWIreviews or the reviewers themselves - these are genuine, unpaid consumer reviews.
Available:
at quality software retailers

Upgrade to Adobe ® Photoshop ® CS2 software for even more of what you crave: more creative options, a more custom-fit Photoshop for the way you work, and more efficient file handling - including batch processing of your digital camera raw files. Stretch your imagination and let the ideas flow with new Photoshop CS2.

Ever since version 2.5 on the Mac, I have been hooked on Photoshop. I don't know how many hours I have spent sitting in front of the PC happily lost in VisualSpace, exploring virtual worlds through an optical canvas. So I am always keen to see what new ways to warp form and function the Adobe team have dreamed up.
I thought I had finally found the perfect tool, really able to give me a chance to explore my artistic impulses, when version 7 came out. In fact, right up until I started exploring CS2, it was the only graphics package on any of my machines, the one and only. Photoshop CS, now sometimes called CS1, was powerful, but just didn't really grab me much. It had 'issues' with my installation of Win2kPro, would cause multiple crashes and hangs, but while it was running it was a stunning piece of softeware engineering.
But anyway, on to CS2... this is where my impressions of PShop's power were issued new benchmark standards, far higher than before. I'll get the niggles out of the way, since they are small and mostly easily compensated for, but should be noted.
When you have the 'info' tab open, performance drops noticeably on medium-low end CPU's. It's a bit wierd, but if you are running on a under-2gig CPU, be patient. The good old ctrl-Z can't be set to 'walk back' through the history states, it will only toggle between the current and last states. ctrl-alt-z now does a history backwalk. The functionality of the 'layers' tab has become somewhat warped by the new gui layout. All the same features are there, but need to be explored anew. Linking layers will be strange... shift-/alt-click layers to select then use link icon at the bottom of the palette. Load times for the wysiwyg fonr menu is also lagging badly at times. Be warned if you have excessive fonts, time to invest in a good font management system.
So now on to the highlights. I would be here for another 30 pages if I went on about all the new features, so I've picked some of the ones I found most noteworthy.
The new Vanishing Point tool is very easy to get started. It's a bit fiddly if you forget to zoom in, so be sure to check the bottom-left corner of the window and set your zoom. I was stunned by the power of the VP tool to use a perspective-adjusted clone stamp function to extend images along their perspective planes.
I had a lot of fun with the 'image warp' feature. If you want to get a good idea of what is going on, try practicing with a picture of a grid. It's basic, but it works so well. It is great to see a tool previously restricted to vector-based application, finalliy in the rasterised-image environment.
The new 'spot heal' tool leaves a bit to be desired, but with practice it can be a great time-saver. It seems to be a hybrid of the 'clone stamp' and the standard 'healing brush'. It still has a way to go, but what a stunning debut.
The new 'red-eye brush' is a wonderful addition, despite being a little late on the scene. An mostly-automatic red-eye fixer has been in some smaller packages for a while. However, Adobe's twist on it is the speed and easy of operation. Activate the tool, set the relative diameter of the pupil, and click anywhere in the affected region. Pow, no more evil eye.
Cosmetics-wise, the new ability to color-code menus, when combined with customised workspaces, allows you to more efficiently target common functions and commands. Great if you are training new users or staff.
Lastly, the 'smart objects' option. This was the icing on the cake for me. As someone who can't seem to make a decent picture in under 60 layers, the ability to create these smart objects is going to have a major effect on my workflow. Smart onjects are like minature PSDocuments inside your main file. They can be treated as flat rasterised layers inside the main document, but double-click them and they pop open as layered image units. Duplicate a smart object, and whatever you do to one will be reflected in all clones of that s/o. This could have some pitfalls for the unwary, but for artists and designers, it's a holy grail come true.
I must mention 'Bridge' - the centralised server/exchange for the Creative Suite as a whole. From here you can monitor and adjust workflow, shuffle files, track version changes, and integrate the entire range of Adobe CS2 products into one multi-station functional whole.
If you only ever buy one graphics package, make it PS CS2. The price is a little steep, but be honest, if this is what you need, it isn't really too expensive. You will get your money's worth.

What is Skype?
Calling, seeing, messaging and sharing with others - wherever they are.

Video and voice calls to anyone else on Skype for free no matter where in the world they are. Stay in touch at home, at work or on the go - Skype's available on your computer, mobile, tablet, TV and even from your home phone.