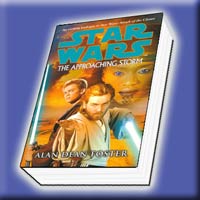 Disclosure StatementFULL DISCLOSURE: A number of units of this product have, at some time, been supplied to KIWIreviews by Penguin Random House or their agents for the purposes of unbiased, independent reviews. No fee was accepted by KIWIreviews or the reviewers themselves - these are genuine, unpaid consumer reviews.
Available:
February 2003

While the entire galaxy watches and waits, two Jedi and their apprentices battle impossible odds to protect the republic...

The Republic is decaying, even under the leadership of Supreme Chancellor Palpatine, who was elected to save the galaxy from colapsing under the forces of discontent. On the tiny but strategic planet of Ansion, a powerful faction is on the verge of joining the growing secessionist movement. If their demands are not met, they will secede - and act that that could jump-start a chain-reaction of withdrawal and rebellion by other worlds of the Republic.

At the Chancellor's request, the Jedi Council sends two Jedi Knights, Obi-Wan Kenobi and Luminara Unduli, to resolve the conflict. Obi-Wan and Luminara, along with their Padawans Anakin Skywalker and Barriss Offee, set out across the wilderness. Many perils lie waiting to trap them and the Jedi will have to fulfil near-impossible tasks before they can complete their mission...

Once again I was impressed by the level of detail afforded the Star Wars books currently hitting the market, and this one among them. This book is a prelude to the Star Wars II : Attack of the Clones movie, and contains some key characters. With the well known Obi-Wan Kenobi and his knowing half-grins, dry humour and serious demeanour, the fiery Anakin Skywalker and his barely-repressed desire to be the most powerful Jedi ever, Luminara Unduli and her extreme talent with the finer manipulation of The Force, all of whom can be seen in the epic fight scene in the arena during the Attack of the Clones movie.

The story is in places a bit drab, reflecting with some accuracy the tedium of a long, desert journey, which I feel adds something to the story rather than detracting from it. Plenty of action fills out the book, with a plot very much akin to those seen in the movies. The intrigue and undercover scheming of the secessionist movement is accurately told in clear ways, yet still seem to have a hidden agenda underneath it all.

All in all, another fine detailed novel in the Star Wars saga, the ongoing cult that could rival Star Trek at this rate. This book fills out a bit more detail about the universe we have all come to know through the movies and books, giving insight into the hearts and minds of those who lived long ago in a galaxy far away...

When the doors of the lift crank open, the only thing Thomas can remember is his first name. But he's not alone. He's surrounded by boys who welcome him to the Glade, an encampment at the centre of a bizarre and terrible maze.

Like Thomas, the Gladers don't know why or how they came to be there, or what's happened to the world outside. All they know is that every morning when the walls slide back, they will risk everything to find out, even the Grievers, half-machine, half-animal horrors that hunt the Maze's walled corridors.