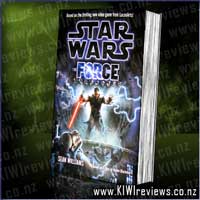 Disclosure StatementFULL DISCLOSURE: A number of units of this product have, at some time, been supplied to KIWIreviews by the company for the purposes of unbiased, independent reviews. No fee was accepted by KIWIreviews or the reviewers themselves - these are genuine, unpaid consumer reviews.
Available:
Available now in all good bookstores

The overthrow of the Republic is complete. The Separatist forces have been smashed, the Jedi Council nearly decimated, and the rest of the Order all but destroyed. Now absolute power rests in the iron fist of Darth Sidious - the cunning Sith lord better known as the former Senator, now Emperor, Palpatine. But more remains to be done. Pockets of resistance in the galaxy must still be defeated and missing Jedi accounted for . . . and dealt with. These crucial tasks fall to the Emperor's ruthless enforcer, Darth Vader. In turn, the Dark Lord has groomed a lethal apprentice entrusted with a top-secret mission: to comb the galaxy and dispatch the last of his masters' enemies, thereby punctuating the dark side's victory with the Jedi's doom.

Since childhood, Vader's nameless agent has known only the cold, mercenary creed of the Sith. His past is a void; his present, the carrying out of his deadly orders. But his future beckons like a glistening black jewel with the ultimate promise: to stand beside the only father he has ever known, with the galaxy at their feet. It is a destiny he can realize only by rising to the greatest challenge of his discipleship: destroying Emperor Palpatine.

The apprentice's journeys will take him across the far reaches of the galaxy, from the Wookiee homeworld of Kashyyyk to the junkyard planet of Raxus Prime. On these missions, the young Sith acolyte will forge an unlikely alliance with a ruined Jedi Master seeking redemption and wrestle with forbidden feelings for his beautiful comrade, Juno Eclipse. And he will be tested as never before - by shattering revelations that strike at the very heart of all he believes and stir within him long-forgotten hopes of reclaiming his name... and changing his destiny.

This book follows the storyline of the videogame and is a gripping read, even if you have played the videogame to completetion and feel you know the story behind the game, you really need to read the book in order to get the fully fleshed out story to the game.

Written by Sean Williams who is no stranger to writing Science Fiction nor is he a stranger to the Star Wars universe having written the Force Heretic trilogy with fellow scifi writer Shane Dix.

This is a well written and deeply immersing novel, and after reading it I wanted to go back and play the game again. This is personally one of the best Star Wars books I have read, and it helps to further enhance and expand the ever increasing Star Wars universe.

Emily's dad is accused of murdering a teenage girl. She's sure he's innocent, but what did happen that night in the woods behind their house? The woods she played in as a child? Determined to find out - and afraid of what she might discover - Emily seeks out Damon Hillary, the boyfriend of the murdered girl. He also knows these woods. Maybe they could help each other. But Damon has his own secrets, about the games that are played in the dark ...