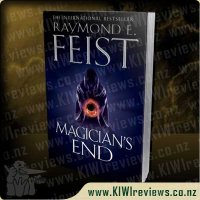 Disclosure StatementFULL DISCLOSURE: A number of units of this product have, at some time, been supplied to KIWIreviews by HarperCollins or their agents for the purposes of unbiased, independent reviews. No fee was accepted by KIWIreviews or the reviewers themselves - these are genuine, unpaid consumer reviews.
Available:
May 2013

The fate of the black Magician will be sealed as prophecy becomes truth in the last book of the Riftwar Cycle. THE FINAL VOLUME IN THE EPIC RIFTWAR CYCLE. The dragons are calling... Civil war is tearing apart the Kingdom of the Isles, for the throne lies empty and rivals are converging. Having spirited his beloved Princess Stephane safely out of Roldem, Hal - now Duke of Crydee - must turn his attention to the defence of the ancient realm so that a king can be anointed by the Congress of Lords, rather than by right of might.

But the greatest threat may well lie out of the hands of men. Somewhere in the Grey Towers Mountains something not of this world is emerging. It will require that alliances be made between mortal enemies if disaster is to be averted. Elves and men must stand together, ancient heroes must rise again, dragons must fly and Pug, Magnus and the other magic-users of Midkemia must be prepared to make the ultimate sacrifice if the whole world is to be saved.

Magician's End is the final novel in the epic Riftwar Cycle which began over 30 years ago and spans over 30 novels. Once again strange things are afoot in the Kingdom and it is up to a select few to make things right.

I have been reading (and loving) all of the Riftwar novels since I was a teenager and I am so very sad to see such an awesome series coming to an end, knowing that I won't get to read about any further exploits on the world of Midkemia. As always there was barely a dull moment what with battles, magic and royal intrigue keeping things interesting. Raymond E Feist is truly a master when it comes to writing and this book is a prime example of that.

The book focuses on some of the old characters that we love as well as some of the newer ones that we have grown to love. Overall it had the feeling of being a well written tribute to the series as a whole and it felt like events were coming back around full circle - a fitting way for such an epic series to end. I was left with very few questions and a sense of completion upon finishing - I couldn't ask for more.

Rip and Mei are trapped inside a brand new video game. No one on the outside knows they're in there. If they don't play the game and find the way out, they'll be stuck ... forever. They must build a shelter and find food while they battle Flametigers, sombrero-wearing spiders and lava-lizards!

How will they survive? Welcome to Dig World!