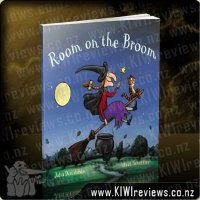 Room on the Broom product reviews

"The witch had a cat and a hat that was black, and long ginger hair in a braid down her back. How the cat purred and how the witch grinned, as they sat on their broomstick and flew through the wind!"

When a witch loses her hat and wand while riding her broomstick, three helpful animals find the missing items. All they want in return is a ride on the broom. Is there room on the broom?

Julia Donaldson books are extremely popular with my 6 and 8-year-old daughters and my husband who loves it just as much, particularly the dog in the story! As with all of Julia Donaldson's books, the artwork by Axel Scheffler is amazing, colourful and cartoon-like animation that really draws the reader into the story.

The Room on the Broom is about a kind witch that flies over the countryside loosing things and having various animals help find them for her in exchange for a lift on her broom. Eventually the broom is so overloaded it snaps and they all fall to the ground. The witch is threatened by a nasty dragon that wants to eat her but is outwitted by the cat, dog, frog and bird that all work together to save her. This is a lovely tale about friendship and working together and my children have enjoyed this book for years. In the early year they enjoyed having it read to them but as they've got older, they enjoy reading it by themselves. The repetitive story and rhyming paragraphs allow the reader to get familiar with the words and make for an enjoyable read. Even now, after hundreds of times reading this story, I still enjoy it and can't recommend it highly enough for others!

Julia Donaldson books are always a huge hit in this house. She is one of my go to authors when I'm looking to buy books for my son. I love the bright illustrations and the clever rhyming story. The book has more words than your average picture book and is good for children (like my son) who have quite an extensive vocabulary at a young age.

In Room on the Broom the witch keeps losing things and in her effort to find them meets all sorts of animals who help her out. In return she gives them all a ride on her broom until her broom finally snaps. The animals then help her out again by rescuing her from a bad situation. It's a lovely story about friendship, helping others and working together.

The rhyming makes it easy for my son to read along with which helps to keep him interested and it doesn't hurt that witches and dragons make for interesting characters. Room on the Broom is a book that we read over and over again and enjoy every time.

I love Julia Donaldson's books and have a few in my collection. This is one of my favoruites along with the Gruffalo and the Gruffalo's Child but we also really enjoy a Squash and a Squeeze. I love how all the books have such great colorful illustrations and the fun rhyming stories.

In the story the witch is not your usually nasty character and finds room on her broom for a whole selection of animals until the broom eventually snaps! I really want to get the DVD as I have seen the trailer for the DVD and it looks amazing it looks like they have really brought the book to live and the animation is amazing.

We have the hard cover version of this book and it has been great as Cai can have it in the books he is aloud to read by himself. Paperback books are put out of his reach but this one is kept on his shelves and he quite often gets this book out and reads it to himself or brings it to me to read it to him.

Julia Donaldson is one of those great children's authors that I seek out at any chance I get. I love her books and Room on The Broom is no exception. They are often a bit wordy (not what I call a quick read) but they are a fun read. The words she uses are well thought out. She doesn't shy away from using large words, and changes up her adjectives plenty. I like this, because it means your child is exposed to several different words for the same thing and more describers. This can only be good for their language development. In this book, there were several moments where I was reading and felt so happy about a word used. I'm a bit weird that way. Words have a lyrical quality and I think Donaldson not only understands that but embraces it and brings it to our kids.

The book is yet again another read aloud success. Its maybe 10+ minutes especially if you are like me and encourage exploration of the pictures and reading what sight words are recognised. 5 minutes if you just race through it. The illustrations are the same whimsical style that Axel Scheffler brings to all his work. He works with Donaldson a lot, so the Dog looks a bit the same as the one in the Smartest Giant, the frog looks a bit like the one in Charlie Cook, etc. They feel familiar and friendly.

The book captivated my 5 year old and my baby. It has something for everyone, especially if your child loves fantastical creatures. I loved the theme of helping others and sharing too. Friendship shines through the characters. While the book is pricey compared to some, I feel that the quality of the work makes it value for money. I would definitely purchase it for a gift, as it is highly re-readable.

Ever since I was introduced to The Gruffalo about eight years ago I have actively searched out Julia Donaldson books. I own many of her books. I had her as a saved search on trademe for a long time too. It always amazes me how she can come up with such original stories and get them to have a great rhythm and rhyme too.

The first time I read Room on a Broom I was kept guessing the whole time about what would happen next. It engaged the class of seven year olds but I also read it to my preschoolers and they love it too. When I read it I often pause before the last word in the rhyme and the kids all say it (or for the first reading guess). The younger ones think they are so clever knowing what it is.

Axel Scheffler does a fantastic job with the illustrations. He not only helps to tell the story but he adds to it with the expressions on the characters. He also illustrates many of Julia Donaldson's other books so they have developed an iconic style so that the moment I showed Room on a Broom to the children they commented that it was like The Gruffalo.

Room on a Broom is essentially a story where a character helps the witch find her lost things and she offers them a lift on her broom in return but it turns out these characters work together to help her when really needs it. This gives the children a great message about helping others as well as the power of unity.

One of my favourite children's book...I love reading this book the children at my work, they will always request this when I sit down to read a story book. I love the bright and colourful illustrations and the repetitive story line allowing the children to remember the words and read along with me or finish the sentence to keep them listening and engaged with the book.

Plus what young person doesn't like believing in witches and dragons, not to mention the cute factor of the animal characters featuring in the book. A cat, and dog, a frog and a bird all helping the witch out so they can go for a ride on the broom, great way to teach young children about helping out people, and becoming good friends in the process.

I first saw this book while I was relieving at a centre and rushed out to buy a copy for myself as I loved watching the enjoyment the children got from having this book as part of their mat time experiences and I wanted to use it with other children so they too could share in the enjoyment of this book. Even though the children have had this book read to them a lot they always ask for it and will sit and listen to it word for word each time...more times than not they will want it read twice!!

Go out and buy a copy now, reasonably priced as you will get a lot of use and enjoyment from this book.