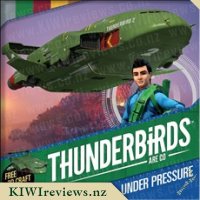 Disclosure StatementFULL DISCLOSURE: A number of units of this product have, at some time, been supplied to KIWIreviews by Hachette or their agents for the purposes of unbiased, independent reviews. No fee was accepted by KIWIreviews or the reviewers themselves - these are genuine, unpaid consumer reviews.
Available:
April 2016

When disaster, strikes, International Rescue answers the call! From a hidden island base in the South Pacific, the five Tracy brothers pilot remarkable cutting-edge Thunderbird vehicles from the depths of the oceans to the highest reaches of space, all for one purpose: to help those in need.

A heavy metal extraction platform carrying toxic waste at the bottom of the ocean is in trouble. Gordon rushes in with Thunderbird 4 when a fire on board the rolling factory damages its steering capabilities. With the help of Lady Penelope and Parker on the surface, Gordon must rescue platform operator Ned Tedford and his pet plant Gladys and prevent the rig from spilling its waste.

I thought that the price for this book was exceptionally reasonable: it is a quality production with full-page illustrations, and there is a model included as well. Mr Six was anxious for me to read it with him as soon as he spotted it: he wanted to get to the end because I had told him that he would not be allowed to detach the model and pop it open until we had first read the story and talked about it. This was actually not a problem: we read it together, and I helped him with some of the bigger words. He is now very proud that he not only knows what words like "aqua" and "toxic waste" mean, but he can also spell them!

Mr Six thought that the way the story was put together with plenty of illustrations and new words that challenged his thinking made the book one that he would read again and again, and he wanted to know when the next one in the series would come out. This was the first time he had heard about Thunderbirds, and he was hooked from the first page. He is also looking forward to seeing them on TV at some stage. It was rewarding watching him sounding out the new words and then working out what they meant. He got most of them correct too!

Miss Four listened as we read the book and looked at the illustrations and, although she did not understand the whole story, she did get the gist of it and was delighted that anyone could have a best friend that is a pot plant called Gladys. She said that was a really cool part of the story and it made her laugh. Mr Six, however, was able to understand the more serious messages in the book and commented particularly that it is important to keep the world free of pollution so that people don't get sick.

The model was a winner. It was quite easy to pop out; it was already pre-constructed, but folded flat inside the back cover. Mr Six had problems making it stay up, but his father showed him how to push the underside into position and then it kept its shape. It is strong enough to withstand reasonably vigorous handling; although it is cardboard, it is heavy duty and carefully designed to support its own joints. At the end of the play, it was put in a safe place with his Lego so it could be found easily when he wanted to play with it again.

So on many levels this book is great. It is affordable, nicely illustrated, written in such a way that the young reader is intrigued to the point of wanting to find out what happens next even if it includes unfamiliar words that he or she has to master, and finally, it comes with its own 3-D model that is sturdy enough to be played with rather than to be abandoned on a shelf. Roll on the next publication in the series!

The Easy Peasy cartoon cooking team are back! Join Rooky Cook the skateboarder, his dog called Hot Dog, crazy chef Gordon Bleu and the Jo Seager character as they show readers how to whip up easy and fun recipes like Tex Mex Tuna Tacos, Easy Salad That Kids Really Like and Rocky Road Icecream.