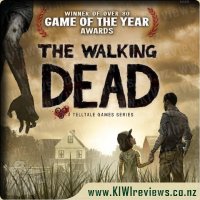 The Walking Dead is a five-part game series set in the same universe as Robert Kirkman's award-winning comic book series. Play as Lee Everett, a convicted criminal, who has been given a second chance at life in a world devastated by the undead. With corpses returning to life and survivors stopping at nothing to maintain their own safety, protecting an orphaned girl named Clementine may offer him redemption in a world gone to hell.

Features:
•  Critically acclaimed with numerous 90%+ and perfect scores for episodes released to date.
•  Incredibly popular with gamers across the globe, generating huge awareness and anticipation in key media
•  Set in the world of Robert Kirkman's Eisner-Award winning comic book series.
•  Full support and involvement from Robert Kirkman and Skybound Entertainment
•  Meet characters and participate in events that will play a part in Deputy Sheriff Rick Grimes' story.
•  Lauded for being unlike every other zombie game.
•  Not a mindless shooter: it tests morals and emotions in a fast-paced adventure game setting
•  A 'tailored' experience: player choice alters the story so that YOUR Walking Dead story may be very different to your friends'.
•  A dark, emotional, terrifying experience that gamers have responded to with impatient demands for more!

This was rented out from the local video store as my husband is a big fan of The Walking Dead comics and TV series. Two Walking Dead games came out at the same time and after a bit of a toss up between the two he decided to borrow this one.

This isn't your typical game, and if you're looking for a movie where you get to slice and dice the undead, don't bother with this game. You play Lee who is on his way to jail when the police car crashes and he wakes up to the nightmare that is zombies. He ends up meeting a little girl named Clementine and vows to protect her and help her find her family.

You do get to walk around and interact with the environment but this is very much a puzzle of a game. Think if this game as a 'pick your own adventure', you are at times engaged in dialogue and you get to pick what to say, pick nothing and your answer is picked for you. This can effect not only what people think of you but who lives and who dies.

This is a great game to bring back the genre, even better is reports that the decisions made in this game will affect how the next game even begins!

The Simpsons Game features a hilarious, sprawling, and mind-busting storyline crafted by the TV show's Emmy Award-winning writers. For this action-comedy, the full cast of voice actors from the TV show and movie reprise their roles to lend the ultimate in authenticity and realism to the game.