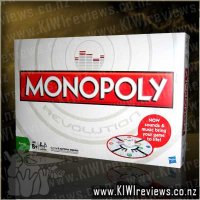 In a contemporary twist on the world's favorite family game, Hasbro is introducing a game where music and sound effects provide a soundtrack to a game played on a sleek, redesigned, round game board. This futuristic update, MONOPOLY: Revolution, features the properties based on the Classic Monopoly that players know and love with sounds and music that will keep them engaged in the game.

MONOPOLY: Revolution features an electronic unit, which serves as banker and music player plus slick new movers. The unit, which replaces cash with money debit cards, keeps tabs on every transaction, plus replaces the Community Chest and Chance cards with exciting sound effects. The new musical sounds add even more fun to the fight for property stardom.

Just as in the original game, players must circle the board to become the wealthiest player of the game by buying, trading and renting the classic properties such as Old Kent Road and Mayfair. But property values have been updated to come closer to reflecting modern values. For example Kings Cross Station [insert relevant], which previously cost $200, will now cost you the more princely sum of $2 million. As has been true for generations, the last player left standing without going bankrupt is the property champion!

Let's be honest, who *doesn't* like a good game of Monopoly? Well, OK, there are a few out there who can't get into it... but for those that do, the cognoscenti agree that the electronic funds system is a vast improvement to gameplay.

Personally, I prefer the cash... sorry if that makes me sound like a fuddy-duddy, but the notes just really make the game feel more fun to me, and inspired some of my favourite commercial printing projects too... but that's a different story.

This variant's 'new twist' is the Zones... the board is chopped up into four 'Zones' and there are effects brought into play that can, at the players choice, affect all other players in a given Zone. This puts a lot of power in the hands of the active player to affect the outcome for, or against, all the other players. It's delightfully evil.

Other than that, the game plays along fairly standard lines, and the only other noticable 'twists' are the round board - all the better for the 'Zones' aspect, but that could have been handled on a regular square board just as well - and the music and sound effects coming from the electronic controller in the middle of the board. My biggest peev with this unit is that ANY button turns it on. So if you pack it away and forget to pull the batteries, pray that nothing bumps the box, because when you next unpack it for play, the batteries will be flat. I went through three sets of batteries before I clicked what was happening!

Overall, still a fun game, still great socialising catalyst, but not 100% sure it's worth forking out another $80 for just to have on hand. If you don't have a 'current' Monopoly variant, this is certainly one worth considering as a purchase, but if you do have a modern variant on hand, it's not significantly different enough to warrant this pricetag IMHO. You may prefer to consider the Monopoly U-Build or Monopoly City variants for something really different.

Well this new version of Monopoly's new name is certainly very apt. Not only does it perfectly describe the shape of the game board, but it also can be used to describe Hasbro's Revolutionary approach to the game.

As in the previous electronic version you no longer have any cash to worry about instead you have these handy plastic credit card type things. Although this also can prove to be a bit of a hassle as it requires you to mentally remember exactly how much cash you have on the card, rather than just checking how much moohla you have sitting in front of you.

Another change is the play pieces. This time around they consist of upright clear plastic with the outline of your selected piece etched into the plastic, also gone are the Chance and Community Chest cards, these are replaced by a random event generator that is located in the central electronic hub/money system. So when you land on a Chance/Community Chest board space, then you press a button on the unit and it will give you a random event, even complete with sound effects. It will even at random times during the game trigger a Chance event that the current player will have to perform, this also include the old favourite 'Go Directly To Jail'.

I like Monopoly and whilst some of their previous version have left me feeling quite daunted this was a fun and easy game to play and I feel the change to Electronic Banking and the Electronic Chance deck makes this even more appealing to the younger players and so makes a great family board game to play.

A horrible crime has been committed on the grounds of Warwick Manor and it's up to the psychic investigators to get to the bottom of it.
In Mysterium, one player takes on the role of the ghost and over the course of a week, tries to lead the investigators to their culprit. Each night the team will be met with visions, but what is the ghost trying to tell you? Can the psychics determine the weapon, location and killer or will a violent ... more...