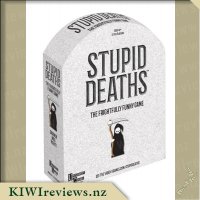 This is the game of dark fun, where players who are dead right win! Many people die in utterly ridiculous ways, and Stupid Deaths challenges players to identify myth versus fact. In this hilarious party game, players work to beat the Grim Reaper before the Grim Reaper beats them.

Players start the game with a True and a False Voting Card as well as an Extra Life Token. All the players begin on the Green space, half way around the board from the Red space where the Grim Reaper starts his chase. The first player takes the top Stupid Deaths Cards and reads it aloud, individually all the other players have to decide if the scenario is real or made up and turn over either their True or False Voting card. Each player who has voted correctly moves their player piece one space closer to home and away from the chasing Grim Reaper. For each player who voted incorrectly the player must move the Grim Reaper one space forward towards their own piece! When the Grim Reaper catches up, lands or passes a play piece, that player has been â˜touched by deathâ ™ and is out of the game unless they use their Extra Life Token to give them one more chance. Itâ ™s a race against Death to be the first player home and reach the Red space!

Stupid Deaths (which everytime my friend brings it out to play has me internally singing "Dumb Ways to Die"), is a very easy game to play, so as long as you can read and don't mind the kids hearing stupid ways people may or may not have died, this is an easy game to pull out for a play. Every card gives you the name of the person or persons purported to have died, their birth dates and death dates (where records allow for exact information) and then it tells you in a short and concise way, how the listed person/s died. Such cards include a man tripping over his beard and breaking his neck, a soldier beaten to death with his own wooden leg and a man who stepped onto the race track too soon, getting killed by the winning car (one of these examples is false...).

Gameplay is really easy, this is a good game to pick up if you want to fill in some time without having to really teach anything to anyone. One person reads out the information on the card and then everyone else uses one of the True/False tokens to cast their vote. If they guess correctly they get to move forward one space, for anyone who votes incorrectly, the Grim Reaper moves a space closer. If it catches up, you're out of the game (unless you have a 2nd chance token). This isn't a game to play if you want to be stimulated, but something that can be entertaining and as a way to pass the time, this could be a good one to add to your game shelf.