Ratchet and Clank: A Crack in Time review 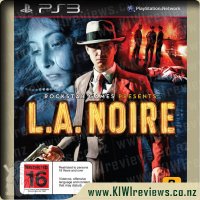 A dark silhouette appears at the end of the alley, and slowly moves toward you as you wait in silent anticipation. The figure is framed by the thin light managing to filter through the dark fog. The streets of Los Angeles are not a welcoming sight at this hour. You pull your hat a little lower, obscuring your appearance from this anonymous informant. He may be on your side, but you aren't taking any chances with a murderer on the loose. You move your hand just the slightest bit and the glint off your revolver finally catches your visitor's eye. He stops dead and you smile. You've got him where you want him, but will he offer up the information you need to solve these heinous crimes- There's only one way to find out.

Experience the thrill of classic detective action with the chill of film noir graphics and themes in L.A. Noire. You'll walk the streets of a perfectly re-created post-war Los Angeles, experiencing the city without freeways, Starbucks or designer dogs. Enjoy this view of 1940's L.A. as you track a heinous murderer committing a series of gruesome brutalities. The drugs, corruption and jazz of this classic decade permeate the storyline and provide an immersive experience you aren't soon to forget. With the open-ended design, you are the only one in charge of your destiny. Will your actions result in a murderer behind bars or will you succumb to corruption and vice-

Features:
Film noir theme offers a look back at this classic dark genre
Open-ended challenge lets you control your own fate
Solve multiple gruesome murders in this interactive detection game to make the streets safe again
Realistic graphics re-create the Los Angeles of the 1940's
Incorporates classic elements of film noir with intense graphics and a storyline that includes drugs, corruption and iconic jazz

Welcome to L.A. in the 1940's. You play Officer Phelps, a newly minted police officer and set forth into L.A. in an attempt to solve crimes. Along the way you get flashbacks of Phelps and other instances, all of which help you to see the bigger story and the events right at the end of the game.

I was keen to give this a try as I like a good crime show and this is one game that really puts you in the scene. You enter the crime scene and must look around to find clues, each clue you look at gives you a little more help in solving the crime. Once you think you have all the clues you talk to any witnesses, the amount of information you can gain from them, the more information the more storyline you open up. Even talking to people you have to pay attention as their facial features gives you clues.

I really had fun with this game, there are even side missions where you can answer calls that come out over the radio which are just good old fashioned chase scenes (foot and car) and shootouts. It's really does get you involved as you need to pay good attention to figure things out or your perp could get of free.

If you like crime shows then this is a great game, the only problem with it is that there once you solve a crime with five stars there is no option for variation, other than that, great game.

Delve further into the Forgotten Realms with Neverwinter Nights: Shadows of Undrentide! Begin your adventure in the small mountain town of Hilltop as a student under the tutelage of a mage named Drogan, and then traverse the deadly Anauroch Desert to reach the ancient ruins of Netheril. Uncover a fiendish plot as you battle a multitude of new enemies through over 20 hours of original new gameplay. Play as any of the classes in the original ... more...