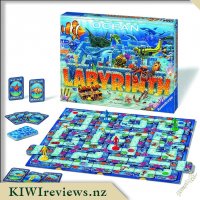 Players try to move through a labyrinthine game board in order to reach a desired symbol shown on a game board tile that matches a hidden card held by this player. The game board consists of a number of fixed tiles as well as rows and columns in which tiles can slide back and forth; these tiles show tunnels - T-shaped, straight, and otherwise - and a player can move his token only along the path as it exists on his turn. At the start of his turn, however, he takes the one tile on the side of the game board and pushes it into a row or column of his choice, shifting the tunnels and pushing out one tile that the next player will use. This player now moves his pawn, and if he reaches the desired symbol, he reveals the card, then looks at the next card in his stack to see what he wants to reach next turn. Once a player has revealed all of his cards, he needs to return to his starting corner. The first player to do this wins!

I grabbed a copy of this game when it was on sale a year ago and it has proven to be a fun, but at times very frustrating, game to play. The aim seems simple enough, the cards get split up between the players, who then look at only their top card (whilst keeping it secret) and they must then reach the matching image on the board. The pictures on the board are a decent size, which helps make them a little easier to find. Each turn you slide a tile into a row, not the same one it just came out of, and then move your diver as far as you want to along the route you've now, hopefully, created. One thing we didn't think of, until a couple of games in, is to make sure you check there's no image on the back, as these affect if you even get to play.

I have found that this can sometimes get a little skewed and that if you start off on a really bad foot in regards to available routes, it can be very hard to catch up to the other players. So many times I would have my play worked out, only to have someone ruin it by their tile placement. What I do like about this game is that every play is guaranteed to be different since half the tiles need to be placed at random, at the start of every play. Fun factor wise, I'm of two minds, I like the re-playability and the attention to the affect your tile placement will have, but I don't like that I can't plan my turn ahead as it could so easily be stuffed up by another player. Still, it is a fun enough game that comes out to the table now and then.

Set in Ancient China during the 3rd century, Dynasty Warriors 6 immerses gamers in a truly cinematic kung-fu action experience. Celebrated characters have been completely re-imagined with new weapons and fighting techniques motion-captured from some of today's leading stuntmen and women in Asia. With the game's new "Renbu" attack system and game controls, players can execute lightning-fast combos and the most dazzling fighting moves with ... more...