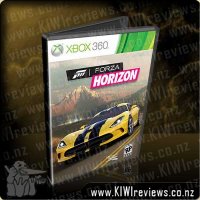 Disclosure StatementFULL DISCLOSURE: A number of units of this product have, at some time, been supplied to KIWIreviews by Microsoft or their agents for the purposes of unbiased, independent reviews. No fee was accepted by KIWIreviews or the reviewers themselves - these are genuine, unpaid consumer reviews.
Available:
23rd October 2012

Forza Horizon is an open-world game based around a fictitious festival called the Horizon Festival, set in Colorado, USA. The game incorporates many different gameplay aspects from previous Forza Motorsport titles, like the large variety of cars, realistic physics and high definition graphics. The aim is to progress through the game by means of obtaining "Wristbands" by driving fast, destroying property, winning races and other driving antics. Horizon is set to feature the physics of Forza 4, which have been optimised to work on the 65 variants of terrain present in the game. Players will be able to drive anywhere their cars can reach, such as fields and plains.

Multiple race types are included, from drift to rally and point-to-point races. AI traffic are present on the roads, which provides a new dynamic to the Forza racing system. Players may also challenge other Horizon festival drivers they encounter in a one-on-one race to a given location. The location is random each time, and the AI have the ability to use shortcuts to their advantage. Races will take place at different times throughout the day/night cycle included in the game, including night races. A skill system is implemented in the game; players earn street cred during races by driving aggressively. Acts such as as drifting, jumping over obstacles and getting a car on two wheels all contribute to the cred. These can be chained together in a combo, which in turn affects the money players are paid at the end of a given race. Cred also affects a player's popularity level in the game. As a player's popularity increases new special events are unlocked, such as races against helicopters and planes.

Speed traps are present in the game, and players can challenge each other for the top speed in a given area. Cameras record player times, which can then be shared among rivals. Those rivals can then attempt to beat the shared time. A photography mode is also included. In addition to races, players can search for barn find cars - cars that have been stored away for long periods of time - restore them and add them to the game.

With this latest foray into the Forza universe the developers have ramped things up a gear and made it a much more immersive experience. To start with the entire game is set in and around the fictional 'Horizon Festival' which is essentially the motor/street racing equivalent of The Big Day Out or other such music festivals. As with the previous games music is a very integral part of the game and this time you have the option of listening to various different radio stations in your selected vehicle. One pleasant surprise was the inclusion of a song by a Kiwi band 'The Naked and Famous' which is huge kudos for them

Also with the change in enviroment comes a change in play style. Firstly in order to get to each event and to the special locations, you now have to drive everywhere (aided by an in car GPS), this serves two purposes, firstly it gives you practice in driving your selected vehicle, and secondly, it enables you to earn cred or popularity points for various stunts and driving skills. In this new enviroment also comes new challenges as well, such as traffic, that's right for much of the game as well as your opponents you will also have to deal with other regular road users, but never fear, they can also assist you as well as being a hinderance, for instance one of the skills for getting cred points is a near miss, this involves you passing by another car on the road as closely as possible without whacking into it, one more difficult than that is the trading paint skill, this involves you passing by another car and actually sideswiping it without either of you losing any control. You also get cred points for drifting, air time and many other things. Your popularity is used in the game to open up special events where you can get new cars just for beating the challenge.

There is still the good old car store, but a new additions is the use of tokens, so for instance if you don't have enough credits to by that spanking new shiny Bugatti Veyron, then you can use your tokens to buy it, however (and here's the catch) the only way to get tokens is to spend your hard brought microsoft points to buy. However tokens aren't used solely to get cars, you can also buy a treasure map with them which will show you where various special items are such as billboard that if you knock them over give you upgrade discounts at the car upgrade garage, and also the locations of all the 'barns'. These barns are essentially locations that contain various classic cars in disrepair, however once you have found one it will get repaired and added to you garage once you collected it from the upgrade garage.

As expected with open world, open road driving there is much more emphasis on offroad racing as well, and this adds and extra dynamic to the races that have it in. In order to progress through the game you have to pass through various levels, much the same as with previous Forza's, each race is with a certain amount of points and each level requires more points. Also with each race there is an added bonus as each level has a favourite driver, and if you beat them in a race you get extra bonus credits, once you have gotten enough credits to complete a level you drive to Race Central and earn your coloured wristband. Also at this time it is inevitable that the 'favourite' drive will challenge you to a one-on-one race, my advise take the challenge as if you win you get their car (sorry I can't confirm what happens if you lose as that hasn't happened yet).

There are two other challenges added which I really love as well, the first is the street race challenge, you star this by coming up behind one of the other 'racers' in the game and if you stay behind them long enough and option will come up to challenge them to a race. The other challenge is Rivals, this is rather unique in that you get to compete against the time set by other racers online (even if you only have a Silver membership).

All up this is the best incarnation of the Forza series yet and I can't wait to see what they do next.

20 years after the original game's launch, Conrad is enlisted back to active service for the triumphant return of one of the most acclaimed franchises in gaming history.

It's not a reboot. It's Flashback re-imagined. The original Core-Team revamped their own creation, leveraging the best of today's technology while remaining true to the classic side-scroller that set the standards of the genre in the ... more...