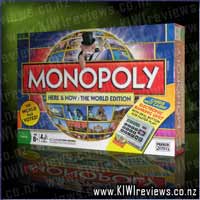 Travel around the world's greatest cities, wheeling and dealing in millions of Monopoly dollars. As you travel, build houses and hotels inspired by buildings from across the globe - from mud huts to skyscrapers.

Discover which cities were voted the greatest by the world. As you play, discover interesting facts about the world on the Chance and Community Chest cards. Check out the international inspiration behind the player pieces, houses and hotels.

No more cash! This version now uses an Electronic Banking Unit and Player Banking Cards to give the game a new more modern feeling.

Also includes a "Deal Button" timer device, to add an extra element of excitement to the game.

Absolutely love the game Monopoly so we jumped at the chance to buy the Electronic version. The first time we played had my husband, my parents and my nana playing and have to say the game does drag somewhat with the EFTPOS machine.

As the banker you are always getting passed someones card to either add or subtract to, then you have them asking for their balance and it felt like everyone was always waiting on me to catch up.

I also find with this you can't see how well off everyone is so you don't know how you are or anyone else is actually placed in the game.

I have also played this one on one with my husband and again it didn't feel like a fast game as you have to swipe the cards all the time.

If we could do all over again probably would not have brought this version as holds the game up to much would much prefer the original or playing on the xbox.

We were so excited to play this the first time, and yes the first time it was fun! But as we have played more it gets a bit boring just handing over a plastic card and it begins to feel less competitive as you cannot see the piles of cash of your opponents. It also was a lot of handing the card over and it became repetitive and a bit of a drag..

Its great that Monopoly is keeping up with the times, but i felt this version lacks the authenticity and substance of the original. I think for kids it could be fun using the credit cards, but in my opinion nothing beats using "real" cash in this game, it helps children assert value to what they are buying.

My kids were given this by their godmother for Christmas. We already have the original version so i couldn't help but make comparisons.

The kids love the excitement of having credit cards and i do like how it is less messy but i feel that it is not teaching them anything as they just swipe without considering how much money they have or having to count it out. Where as with the original game my oldest spends time counting out 5's and 10's and 20's as he does not like to give his 100's away. I feel that the original game teaches them many life skills such as the value of money, how to count money and about savings, this newer version promotes the 'swipe till it reaches $0 theme' more.

On a more positive note i did like how this is the world edition with new landmarks and characters.

Overall just another spin off of the original Monopoly and i guess the game will remain in alot better condition than the original with less torn or missing notes. But personally i prefer the original.

This is really something different, a neat thought, but it slows down an already very slow game, the kids all love this new type of monopoly, though it ends up being more about swiping their credit cards rather than playing the game, still I love monopoly and with me being a collector, it is in my collection to stay :)

Monopoly is, without a shadow of doubt, a classic and one would think it would be hard to better something that is already a classic. Well, it would appear that Hasbro have done it by producing a World Edition.

One would remember all the hype as to whether NZ landmarks would be included and celebrities urging people to vote for NZ landmarks. So knowing this we were eagerly awaiting the final result. Are there any NZ landmarks in this World Edition? You will have to buy it and find out for yourself.

The electronic edition has a 'cash machine' that makes it easier because there are no paper notes to be lost, stolen and damaged. Transfer is almost as easy as your own cash point card - but unlike your cash point card, the money is in millions. Something I would like to see in my own account.

As with regular Monopoly, the instructions are easy to understand, though a colour booklet now explains the game and the cash machine. Clarity is something to behold - both in the booklet, the board itself and the insert that informs one of all the world locations used in this board game.

One can say a lot about this game in its various forms, and the World Edition is no exception to the Monopoly family. The fun-factor is is all there unchanged. All you have to do is play it.

After discovering that lovable robot Clankâ ™s disap­pearance was engineered by Dr. Nefarious, the Wrench-swinging Ratchet races to save his best friend. Along the way, both will finally uncover the hidden truth behind ... more...