« The Muppets : Wizard of Oz review 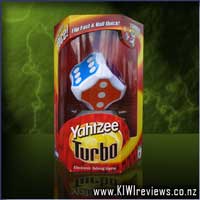 Disclosure StatementFULL DISCLOSURE: A number of units of this product have, at some time, been supplied to KIWIreviews by Hasbro (NZ) or their agents for the purposes of unbiased, independent reviews. No fee was accepted by KIWIreviews or the reviewers themselves - these are genuine, unpaid consumer reviews.
Available:
at quality toy retailers

Race the clock and see if the dice roll your way. Follow the electronic commands then roll and match the dice to the cards in your hand!

Can you get a small straight, full house or three of a kind? The first player to discard all of their cards is the winner!

This is an action packed game!! And very addictive to boot!! I love the way all the dice, instructions and cards all fit in the compartment below the "Big Die". The "Big Die" looks colourful and appealing, and is very sturdy. It has had more than a few "taps" from me to try and beat the clock.
I think it's great how if you beat the clock 3 times, it quickens the pace up, or if you lose to it 3 times it will slow the pace down.
This game has been very well designed as it has all ages in mind. There are red cards for adults (having to get small straights and full houses and chance cards) and Blue cards for kids (having to get 3 and 4 of a kind cards).
The only downside of this game is that it only has the one beat, and only a few sayings, it would be better if it had 2 or 3 beats and a few other sayings. The saying "Don't forget to tap the Big Die once to start" turns into "Tap the big guy once to start".
This game is A LOT of fun!!!! If you want a really quick game, deal 3 cards instead of 5.

I have always enjoyed the classic Yahtzee games, with the scorepad and occasionally a small sandtimer to add some incentive to the game, so I was quite curious to see how it could be converted to an electronic version.

As I opened the packing crate and pulled out the game's box, I was quite stunned, it wasn't at all like anything I had seen before, and I was struck by the giant die with it's odd shape. This was going to be interesting alright...

After a quick flick through the contents, and a read of the instruction sheet, I took it to a mate's place and we dived in for a game or two. I have to say, we had a blast, laughing all the way through with much good-natured cursing of the dice who simply REFUSED to do as they were told!

The novel twist of having to roll to match the cards was, at first, a little annoying, as we were trying to match the numbers on the cards as well as the overall 'hand'... but we soon decided to just go for a 'full house' of any numbers, 'threes over fives' for example, rather than aim for the 'sixes over fours' as drawn on the cards. This allowed us to actually complete a game in under 2 hours. Once this was deemed a viable tweak to the rules, we had a lot more fun.

The game is not at all difficult in strategy, and the semi-random actions imposed by 'The Big Die' (yes, a 'die' is one, while 'dice' is plural...) electronic game unit keeps the players on their toes, since you don't know if you are discarding cards or passing them to another player, or if you are going to be handed extra cards to extend your game.

Overall, though it might take younger children a bit to get used to, and they will probably need adult guidance to start with, I can see this game being a big hit over the Christmas holidays during Family Time. And if the weather is good, why not let the kids go mad with this while the adults head outside for a beer and a chat around the BBQ...

A dark silhouette appears at the end of the alley, and slowly moves toward you as you wait in silent anticipation. The figure is framed by the thin light managing to filter through the dark fog. The streets of Los Angeles are not a welcoming sight at this hour. You pull your hat a little lower, obscuring your appearance from this anonymous informant. He may be on your side, but you aren't taking any chances with a murderer on the loose. You ... more...