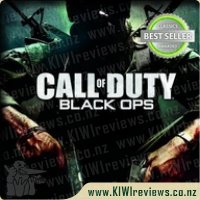 Call of Duty tackles a whole new era as Black Ops plunges you into the murky height of the Cold War and history's most secretive battles. The world's most popular first person shooter places you in the most dangerous conflict zones of the late '60s.

From the jungles of Vietnam to the snowy wastes of the Ural mountains, you and your team must operate behind enemy lines and using only the limited technology of the time. Luckily this includes air support such as the SR-71 Blackbird stealth plane, as well as deadly attack helicopters and armoured personnel carriers.

Like any Call of Duty game the multiplayer will set the standard for all other console games, with enhanced customisation tools, playable vehicles and a revamped scoring system. There will also be a unique four-player co-operative mode, allowing you to experience some of the most mysterious theatres of war in astonishing new detail.

We bought this game as my husband kept borrowing it from the DVD store because he was really enjoying playing the game, and when it's costing $20 for every 8 days of play..... Yup, needed to buy it.

The story mode was ok, it had some parts that were good, but it wasn't really that long. Whilst you got involved very easily, this game just isn't really made for its plot, but more its multi player mode. It only took a couple of days of play for my husband to complete the story mode, so if it were based upon that alone this wouldn't be that good a game.

If I were to rate this game solely on the multi player aspect then it would bump up to a rating of 8 across the board, but one has to account for the main story mode, which brings the rating down in all aspects. Always a good thing with popular games, is just how many people log on to play, and so there was never a shortage of opponents.

There is also a zombie mode, where your enemies are zombies. You get to pick from a couple of options, one is an old building where you go through various stages and the other is you are locked down in the presidents secret room.

This game is great for on line, not so much for solo play.

Red Dead Redemption is a Western epic, set at the turn of the 20th century when the lawless and chaotic badlands began to give way to the expanding reach of government and the spread of the Industrial Age. A follow up to the 2004 hit Red Dead Revolver, this game tells the story of former outlaw John Marston, taking players on a great adventure across the American frontier.