Shout It Out! review 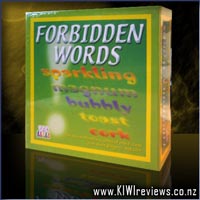 Communicating a specific word, item or object to your team-mates by giving verbal clues is easy, but when you are against the clock, and most of the words you would like to use are forbidden, it is not as easy as it might at first seem.

How on earth do you communicate 'Pizza' to them if you are forbidden from using the words 'fast-food', 'cheese', 'toppings', 'deep-pan' or 'eat'?

Forbidden Words is the quick-talking and even quicker-hinking game tht will have you, quite literally, tongue-tied.

For 3 or more Players.

If you have serious stuttering problems, you may find this game very interesting.
Rules need a bit of a tweak here and there but still a fun, amusing, frustrating game...
You may find yourself asking "why oh why couldn't you see that 'triangle' meant cat!", because to get maximum points you need the others to get what you're so clearly trying to describe. You start wishing the tip of your tongue, where many words get lost, had a voice of it's own.

After a couple of rounds of play and a slowly creeping confusion toward the scoring, it was decided some modifications were needed to speed things up. I have played games like this many times before and they nearly always give the same response while playing... " I don't know how to tell you what the word is, without TELLING you what the word is..."

This game would be well suited, I think, to people who liked word puzzles and games. It may also be useful for teaching vocabulary to people who have had a head injury.

Overall, a well conceived game - if a little too familiar - that is easy to follow and should provide hours of enjoyment for the whole family.

An unusually fun game, but it has some wierd scoring rules... wierd enough that we decided to modify the rules beyond recognition... it became easier to create a hybrid of the 4-individuals and 2-teams-of-2-players scoring rules... but after a couple of rounds, even that went out the door.

In the end, we decided the best way to play this game would require 8 players, divided into 2 teams of 4... one player is the Describer for their team of 3 Guessers, while the entire opposing team became Adjudicators... and the scoring became 2 points for each correctly guessed Target Word, with a bonus of 3 points if all three Target Words were guessed within the alloted time. But since we only had 4 players, we just bumbled along scoring 2 points per Target Word for the Describer's team, and 1 point for a successful guess by the opposing team, with no bonus for completing the card. This worked 'OK'...

Despite the intial confusion while we worked out some scoring rules, the game itself was a lot of fun, prompting much thought and lateral thinking by all players... after all, we are so used to using the most common desciptors for an object... it was kinda like a fun night of verbal aphasia, or Demento's Charades.

Overall, it was a great way to wind down the night, after much gaming of other fun titles, and if you have a group of friends who think they are real clever-clogs... throw this one at them and watch them flop around stumped like a... one of those scaly aquatic things that taste good crumbed and fried, with lemon juice... you get them in burgers, or canned... caviar comes from one type of them...

For those of you who like testing the old gray matter a bit, then this is a game that is ideally suited for you. The rules are very simple, you need a minimum of three people to play this game, each person has a turn at trying to describe the first word on the drawn game card and try to get the other players to guess it in approx 60secs, but without using any part for the 'Target' word or any of the 5 other 'Forbidden' words.

This is one game that had me thinking right from the start, and let me tell you 60 secs may seem like a while normally but when playing this game it's way to short.

And if you find that this is still too easy for you, then why not make it harder by adding more forbidden words yourself?

So while not exactly unique as I have seen other similar type game before, this is still a very entertaining game.

C.S. Lewis's magic has been to the big screen, and you will now be able to relive the truly magical story with the Chronicles of Narnia Top Trumps pack. Follow Peter, Susan and Lucy on their magical trip through the old wardrobe into the world of Narnia. They, Aslan the Lion, White Witch and anyone who's anyone in the land of Narnia is rated on categories including 'Wisdom', 'Courage', 'Cruelty', 'Height'', 'Combat Skills' and 'Magical Powers'. ... more...