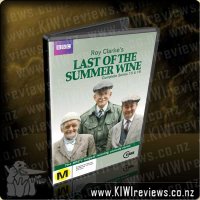 Last of the Summer Wine - Series 15 and 16 product reviews

The BBC's longest running comedy series, Last of the Summer Wine, follows the comic trials and tribulations of life for a group of retired friends.

Here we are again in the beautiful Yorkshire village of Holmfirth, where it's time to catch up with our three mischievous, merry men. Clegg is drinking far too much homebrew for his own good, Foggy, on the other hand, isn't full of beer, but brilliant new ideas, such as amazing new bicycle safety underwear and a rather treacherous three-man sail-board. Neither is life without incident for Compo, as he discovers Nora Batty's penchant for a man in riding-gear, he launches himself as a one-man band and test drives the most unlikely mode of transport - a giant wheel. Only in Holmfirth!

Last of the Summer Wine - The basis was simple but complex at the same time, telling the stories of three old men, who in all essence couldn't be more young at heart. The antics of the trio continue in series 15 and 16, the humor not lost at all. The story-lines still as funny and crazy as when the sitcom first launched. I laughed out loud when the trio talked their neighbour into dressing as a woman and riding a bicycle to deliver a birthday card to the woman he fancied, and giggled away quietly at Compo, when he struggled with aging.

The DVD series RRP is $59.99 and I really feel this is fantastic value. The sitcom is one that will always make you laugh, the actors are and were fantastic and each series different.

Thank you KIWIreviews and Roadshow for letting me review this one.

The lowdown of the series:

The original trio consist of Bill Owen, as Compo Simmonite, the scruffiest man in Yorkshire, with only two passions in life: his ferrets and Nora Batty (Kathy Staff). Norman Clegg, played by Peter Sallis, the timid one of the group but also the one who gets carried away by the crazy ideas and schemes of his companions, ending up in trouble every time and lastly Foggy Dewhurst (Brian Wilde) who always seems to have a scheme or a story that somehow leads to his old days as a war hero... or so he says. (Brian Wilde left the series in 1986, returning after 4 yrs when his own sitcom failed, he stayed for 7 years and then left again in 1997, he was replaced by Frank Thornton - Truly Truelove of the yard - an ex police officer).
When Bill Owen passed away he was not immediately replaced in the series, his permanent replacement came a year after his death when when Keith Clifford joined the cast as Billy Hardcastle, a man who fancies himself the descendant of Robin Hood. In 2003, the traditional trio became a quartet with the addition of Brian Murphy as Alvin Smedley, Nora Batty's new next door neighbour. With the addition of Alvin, an element of physical humour missing since Compo's death returned to the series. The quartet once again became a trio when Keith Clifford left the series in 2006.
In 2009, the series was again redesigned to allow Sallis and Thornton a reduced role on the series. A new third man was introduced in the form of Hobbo Hobdyke (Russ Abbott), a former milkman who fancies himself a former MI-5 agent. By combining Hobbo with Alvin and the electrical repairman, Entwistle (Burt Kwouk), a new trio was formed, proving once again the ability of the show to redesign itself over time. The main cast has always been surrounded by some amazing supporting cast throughout the run of the series, who helped to mantain the series as fresh today as it was when it premiered on the BBC

The Sound Workshop presents Fleetwood Mac - The Chain. A collection of Fleetwood classics with something for everyone to enjoy and remember: from older classics like Albatross (a hit for the first Fleetwood Mac line-up), to The Chain (a big favourite) Rhiannon, Gold Dust Woman, landslide, Go Your Own Way, Don't Stop through to Tusk. Although delivered with choreography and costuming and the use of similar instruments, the show's ... more...