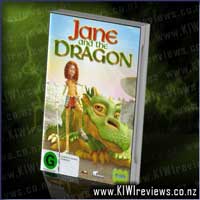 Disclosure StatementFULL DISCLOSURE: A number of units of this product have, at some time, been supplied to KIWIreviews by Roadshow (NZ) Ltd or their agents for the purposes of unbiased, independent reviews. No fee was accepted by KIWIreviews or the reviewers themselves - these are genuine, unpaid consumer reviews.
Available:
June 2007

Jane and the Dragon product reviews

Jane and the Dragon is a captivating, contemporary coming of age story set in medieval times, co-produced by multiple Oscar Award-winning Weta Productions.

Jane is twelve years old and training to be a knight. It's a tough job proving herself to the King, to her parents and to the other knights. But Jane does have a little help - she has a giant green dragon by her side. Dreams can come true - even a young girl's dream of becoming a knight in the King's Guard

The Revelation of the Pyramids
Rating: 9.8

This is an absolutely gorgeous little series about a very plucky outspoken young girl, Jane, and her friends from the castle, amongst them the bumbling, playful, always-eager-to-help, and rather large Dragon. Between them, Jane and her friends get into all sorts of mischief as both Dragon and Jane try to prove they can be very useful around the Castle, despite Jane being very unladylike for that era in wanting to be a knight, rather than the lady-in-waiting she was supposed to be.
With beautiful artwork and clever animation, Jane and the Dragon is a delight to watch for both young and old, and has a very catchy theme song that had my son and I tapping our feet and singing along to it, and wanting to go back to the beginning again, just so we could hear it once more. Bravery, adventure, the value of friendship, and the "you-can-be-whatever-you-want-to-be" theme, all feature during these episodes, making it one of the better ones to be sitting youngsters down in front of these days. Very much looking forward to the next lot being put out on DVD- until then, I guess my son and I will just have to get our fix of Jane and her friends from the TV- LOL!!

SKYCITY Auckland is the place to celebrate Chinese New Year next month with the Sky Tower lighting up red and gold from the 12 February - 2 March 2007. A breathtaking acrobatic and martial arts show, musical performances, traditional ceremonies, themed decorations and a Lion Dance will all celebrate the arrival of the Year of the ... more...