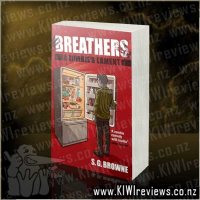 Disclosure StatementFULL DISCLOSURE: A number of units of this product have, at some time, been supplied to KIWIreviews by Hachette or their agents for the purposes of unbiased, independent reviews. No fee was accepted by KIWIreviews or the reviewers themselves - these are genuine, unpaid consumer reviews.
Available:
May 2011

Meet Andy Warner, a recently deceased guy and newly minted zombie. Resented by his parents, abandoned by his friends and reviled by a society that no longer considers him human, Andy is having a bit of trouble adjusting to his new existence. But all that changes when he goes to an Undead Anonymous meeting and finds kindred souls in Rita, an impossibly sexy recent suicide with a taste for the formaldehyde in cosmetic products, and Jerry, a twenty-one-year-old car-crash victim with an exposed brain and a penchant for Renaissance pornography.

When the group meets a rogue zombie who teaches them the joys of human flesh, things start to get messy, and Andy embarks on a journey of self-discovery that will take him from his casket to the SPCA to a media-driven class-action lawsuit on behalf of zombies everywhere.

I've never really been a zombie fan but Breathers sounded interesting and different enough that I thought it'd be worth a go. It was different alright and certainly had potential! Not your usual zombies running around chasing people with the all too familiar cry of "brrraaaaiiiinnnnsssss!". No, instead they get together with other zombies for a friendly neighbourhood BBQ (or the occasional romantic dinner), where the main course is a choice of human flavoured steak or sausages, with maybe human stuffed mushrooms or deep fried finger rolls as appetizers, and creamed brains for dessert. They go to group therapy sessions, and enjoy going for walks, watching old tv reruns and drinking copious amounts of alcohol. They even write letters to the Government and start petitions because zombies have rights too you know!

Somewhat dry and bland, Breathers was only a slightly interesting, although slow, read that fell a lot flatter than I'd hoped, with characters who were rather shallow and boring... and lacked any real X-factor. The only thing that made this book bearable to finish was the different view of zombies, as I wanted to see just where Browne would take it. Done from the viewpoint of the main character Andy, who is a zombie who's rather bored with his every day un-life. There is the odd giggle-worthy moment, but there are certain lines that were repeated regularly throughout the book, which were rather irritating and boring.

Overall, Breathers has now strengthened my dislike of zombies and really was a hard slog to wade my way through. If you like zombies, you may appreciate the unusual twist and may even find the story interesting, but if you're not a zombie fan, don't bother with Breathers as it probably won't change your mind.

Babies love playing peekaboo from about six months onward-and once they latch on to this simple game, they can't get enough of it! DK's Peekaboo books make the most of this fun interactive activity with flaps that open to reveal appealing babies and toys.

Peekaboo: Rainbow Colors focuses on a variety of objects to highlight the colors that make up our world