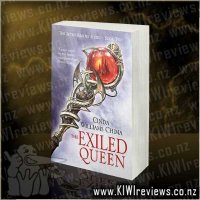 Disclosure StatementFULL DISCLOSURE: A number of units of this product have, at some time, been supplied to KIWIreviews by HarperCollins or their agents for the purposes of unbiased, independent reviews. No fee was accepted by KIWIreviews or the reviewers themselves - these are genuine, unpaid consumer reviews.
Available:
Available now

Haunted by the loss of his mother and sister, Han Alister journeys south to begin his schooling at Mystwerk House in Oden's Ford. But escaping the Fells doesn't mean danger is far behind. Han is hunted every step of the way by the Bayars, a powerful wizarding family set on reclaiming the amulet Han stole from them. And Mystwerk House has dangers of its own. There, Han meets Crow, a mysterious wizard who agrees to tutor Han in the darker parts of sorcery - but the bargain they make is one Han may regret.

Meanwhile, Princess Raisa ana'Marianna runs from a forced marriage in the Fells, accompanied by her friend Amon and his triple of cadets. Now, the safest place for Raisa is Wein House, the military academy at Oden's Ford. If Raisa can pass as a regular student, Wein House will offer both sanctuary and the education Raisa needs to succeed as the next Grey Wolf queen.

The stage has been set, the characters introduced, and audience attentions gained... now it's time for the real adventure to begin as both Han Allister and Raisa get settled in to the academy in Oden's Ford. Here, they cross paths once more while they learn more about their abilities and how to push themselves in preparation for what lies ahead. The romance that blooms in a few places and the battle scenes are somewhat predictable, especially if you're well versed in the fantasy genre, but written in a way that keeps you captivated and allows you to turn a blind eye to the predictability. Cinda Williams Chima has written a very detailed, intriguing style of fantasy with a well painted world and captivating characters you'll learn to love along with a storyline that will sweep you on until the very last page. It was nice to have something fresh and gripping that doesn't involve anything relating to supernatural creatures for a change.

I loved how some of the background characters started to move forwards in this book, becoming a stronger part of the plot than they had originally appeared to be in the first book, "The Demon King", and how some of the seemingly "bad guys" start to show hints of not being as fully seated on the bad side of the fence as they first appeared. The two main characters, Raisa and Han, are definitely growing up within this book. Raisa goes from being a ditzy, boy-focused, self-centered brat to a strong-willed, independent, smart and confident young woman who shows great potential for leading her Queendom, while Han changes from a cocky street rat not really going anywhere and who's always getting into trouble to a confident and very talented young wizard still forever getting into trouble, (some things you just can't change! ;-P), as he is pulled in several different directions by several people demanding different (and in some cases, contradicting) tasks of him.

This is definitely a series where you need to read them in the correct order, otherwise you will miss quite a bit of the backstory which will then leave big holes and a lot of questions as you continue, but each book is as fascinating as the other and there is action, love, adventure, magic, and politics aplenty. If you have read any of Chima's other books, or enjoy a good fantasy series, then this is a series that is well worth a read... just make sure you have plenty of spare time put aside, because this is a book that is very hard to put down once you get started!

All across the world, legends are appearing.Great Beasts - once the most powerful beings in Erdas - are being summoned as spirit animals. Bonded to special kids, they unite the human and animal worlds.

But a mysterious stranger is hunting these legends, just as they are reborn, and he's crushing anyone who stands in his way.

These are the stories of those stolen legends, and of the young heroes who will stop at nothing to get them back. These are the Tales of the Fallen Beasts.