ProdID: 7245 - The Unicorne Files 3: A Crown of Dragons
Written by: Chris D'Lacey 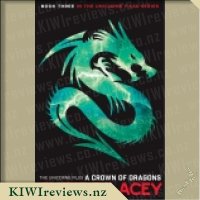 Disclosure StatementFULL DISCLOSURE: A number of units of this product have, at some time, been supplied to KIWIreviews by Scholastic (NZ) or their agents for the purposes of unbiased, independent reviews. No fee was accepted by KIWIreviews or the reviewers themselves - these are genuine, unpaid consumer reviews.
Available:
August 2016

The Unicorne Files 3: A Crown of Dragons product reviews

Michael has completed two missions for UNICORNE, but still hasn't found his missing father. When asked to investigate a scale of a dragon - the very same artefact his father was researching before he disappeared - Michael realizes he's closer than ever to unlocking the truth. Soon, he learns that his father is lost in an alternative reality, and Michael is the only one with the power to save him...

Reading this book I found myself thrown into the deep end. It's been a while since I read the previous installments of the trilogy, so I was initially thrown off by the instant rush of information handed to me, combining both new information and a quick summary of the general backstory, creating quite a hectic initial chapter. The Unicorne Files is inspired very much on the X-Files franchise, and is therefore a very descriptive series. Every new experience or organism requires explanation and vivid description to provide a successful image in the mind of the reader, and I feel this final installment struggles with balancing plot and describing the imagery.

With less than 300 pages, 'A Crown of Dragons' is a compact story that could almost be considered a standalone book. Beyond recurring characters, and the overall continuation of the story arc where Michael searches for his father, the plot starts, accelerates and concludes all within these pages. The condense nature of the story has it's pros and cons; On one hand it accelerates and the plot is continually moving forward (there is very little "filler"), but on the other hand, a lack of quiet contemplative moments makes it seem rushed and the ending, anticlimactic.

The protagonist Michael is supposedly a teenager, but often his schoolyard portrayals come off more like those of a primary schooler, giving him a much more immature feel to his character. But his reactions to every bit of information is something that I can empathise with. Michael has a tendency to overthink little details, but when the occasional details prove to be true, they create a paranoia that spreads and leads to an air of distrust towards everyone he knows. Loyalty, Family, Trust, and Deception are the key themes that come through.

Overall I found the story to have an irregular flow to it, and unlike the first installment, I found myself putting down the book several times to do other things. Despite the excitement of "dragons" and supernatural "physics bending" events, I failed to truly capture my interest. The climax of the story was almost skipped over (only lasting around 20 pages), at which point the story ended promptly. Before I had reached the penultimate culmination of the plot, I had started seeing the various storylines that the book was opening up, the limitless potential, so to have it end as it did, felt like a waste.

A disappointing end to what started off as a great series.

Having already read the second book in this series, I was looking forward to reading this one (the third and last). Although it largely features the same characters, with Michael as the main protagonist, the story is quite different. There is more emphasis on biological influences (both real and imaginary), with plenty of plausible examples along the spectrum. There are clones, alien life forms, DNA and other material from extinct and/or mythological creatures, surgical implants, and metamorphosis to name but a few. Add to that the psychic phenomena of ESP and telekinesis and you have all the ingredients of a great sci-fi fantasy yarn with a good dollop of horror thrown in!

At its most basic level, the book traces Michael's quest to find his missing father. He has a mother and sister, both of who are close to him, and a close friend (Freya) who used to be a human but now has the outer form of a crow. When you start reading, you do so on the understanding that anything is possible. It was my own experience that, once I had finished the first two chapters, I was hooked by the pace of the story anyway and so I just relaxed and let it unfold.

Before long, the plot had me thinking about just why we trust people and what happens if someone betrays that trust. There is a strong subplot around loyalty and betrayal which makes it of particular interest for pre-teens who may be going through friendship issues themselves. Sometimes, however, I got frustrated in trying to keep track of just who was on side and who was not - as allegiances shifted this became rather annoying! There are no black and white characters; all have the potential to be good and evil and occasionally the same character can be both! It is unusual in a children's book to find this aspect, but it will certainly stimulate their analytical skills and really make them engage with the story.

Overall I enjoyed the book, and I do have to say I am sorry this is the last of the series. It did end quite abruptly, possibly because the author wanted to tie up the loose ends after establishing the Michael and Freya characters and solving the immediate mystery which had been the subject of the trilogy. However, there is always the possibility that another trilogy might follow with Michael and Freya united in pursuing a new quest. Who knows?

One day, whilst searching in a cupboard, Glyn finds a sealed envelope with the words "Don't Open - Destroy' scrawled on it by his wife, Kath. Compelled by curiosity to ignore her instructions, he breaks the seal to find a photograph showing Kath holding hands with another man.

Suddenly this one act of betrayal - hidden, concealed for many years - obsesses Glyn as he tries to get to the root of Kath's infidelity. But what other lives will be torn apart as he recklessly delves into the past, and what is the truth about Kath?