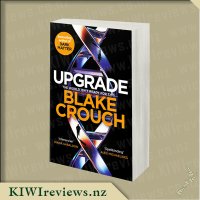 Disclosure StatementFULL DISCLOSURE: A number of units of this product have, at some time, been supplied to KIWIreviews by Macmillan Publishers Ltd or their agents for the purposes of unbiased, independent reviews. No fee was accepted by KIWIreviews or the reviewers themselves - these are genuine, unpaid consumer reviews.
Available:
July 2022

"You are the next step in human evolution..."

At first, Logan Ramsay isn't sure if anything's different. He just feels a little sharper. Better able to concentrate. Better at multitasking. Reading a bit faster, memorizing better, needing less sleep. But before long, he can't deny it: something's happening to his brain. To his body. He's starting to see the world, and those around him, even those he loves most, in whole new ways. The truth is, Logan's genome has been hacked. And there's a reason he's been targeted for this upgrade. A reason that goes back decades to the darkest part of his past, and a horrific family legacy.

Worse still, what's happening to him is just the first step in a much larger plan, one to inflict the same changes on humanity at large, and at a terrifying cost. Because of what Logan's becoming, he's the one person in the world capable of stopping what's been set in motion. But to have a chance at winning this war, he'll have to become something other than himself. And even as he's fighting, he can't help wondering: what if humanity's only hope for a future really does lie in engineering our own evolution.

Klutz: The World According to Klutz
Rating: 8.6

Having read some of Blake's other works in the past, I turned to the first page fully expecting my mind to be stretched almost to the breaking point by the concepts and the explicitly-detailed science used in the construction... and by the end of the story that's what I had gotten. So, fair warning to those who may be curious about Blake's stories - expect to feel like your brain has been given a workout.

The story starts off without much exposition of the backstory, the protagonist and very little world-building. This, combined with subtle cues and revelations as the story progresses, gives you a sense of being in the world of the story, discovering something big and terrifying only in glimpses of the shadow it casts. You find out just how the world became broken by one brilliant mind making a small, innocent mistake in the service of a greater good. Even though it was approved and authorised, one small act tore the world asunder, gave rise to a new level of paranoia and ostracised an entire branch of scientific endeavour.

Our protagonist was but a child at the time of the great catastrophe, but his life since has been one long act of atonement and contrition that has driven him to turn from keen advocate to active deterrent. And then, during what should have been a relatively simple snag-and-bag mission his world is turned inside out once more, in the most unexpected ways, by the most unexpected agency. Thus begins an adventure he neither wanted nor sought out, but once started he had to play it out to the bitter end... an end that could spell the salvation or destruction of the remaining human race.

To call this tale imaginative is to do it a great disservice - inspirational, prophetic, terrifying are all far better ways to describe the story - woven together from hard science, speculative theories, current technology extrapolated in a rational and realistic direction, and some sheer bloody-minded but honest assessments of the human condition. In this age of apparent social insanity, this story is as likely to happen as not, and it could all depend on the mental stability of world leaders who, at the time I write this, appear to have none. If the wrong power-player got a hold of the technology described in "Upgrade", the world really could go down a very dark - but ultimately short - path to destruction.

Blake Crouch has brought forth another cautionary tale wrapped in an entertaining, educational and enthralling storyline that puts a very personal perspective on things. The son of 'the woman who broke the world' becomes the next step in human evolution, the first guided step rather than the aloof hand of natural selection. But the question is raised and must be addressed - just because it is a step forward, is it a step in the right direction? Can we advance the human mind and body and in doing so force the human animal to evolve beyond its instinctive drives? Or should we instead explore other pathways to 'a better way to be' that can blunt the ingrained desire to protect ones one at the expense of 'others'.

Overall, this is another speculative but spectacular 'possible future' from Blake Crouch, that will be especially enjoyable to those with a heavy leaning towards science. The first few chapters in particular may feel like a bit of a hard slog, as the ins and outs of genetic coding and resulting expression are laid on thick and fast. However, if you can make it through the first third of the book, the unfolding story will capture you to the point where you simply won't want to put the book down. Normally, I would read a book of this size over the span of 1-2 weeks, since I don't get many long stretches of down-time, however I found myself making excuses to pick it up again to soak up another chapter.

I've thought of killing myself, but something stops me. "Just think, it says, you'll go further than anyone else has ever been. You'll see deeper into space than anybody else has ever seen. You'll make history." "But nobody will ever know," I reply, and the something doesn't say anything back to me, just sits there in the dark. I take my place in the chair at the front of the ship and decide to ride it ... more...