ProdID: 8070 - The House With a Clock in Its Walls
Written by John Bellairs 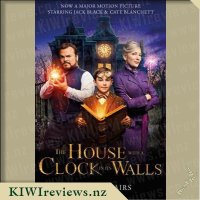 The House With a Clock in Its Walls product reviews

Lewis Barnavelt doesn't have time on his side...When Lewis Barnavelt, an orphan, comes to stay with his uncle Jonathan, he expects to meet an ordinary person. But he is wrong. Uncle Jonathan and his next-door neighbour, Mrs Zimmermann, are both witches! Lewis couldn't be happier. What's not to like about seeing his uncle practise spells and eating Mrs Zimmermann's famous cookies?
At first, watching magic is enough. Then Lewis experiments with magic himself and unknowingly resurrects the former owner of the house: a woman named Selenna Izard. It seems that evil Selenna and her husband built a timepiece into the walls - a clock that could obliterate humankind. As the clock can be heard ticking away in the house all the time, sometimes louder, sometimes quieter, sometimes faster, sometimes slower, it is up to the Barnavelts to find where it is hidden in the walls - and stop it. A true race against time...

I've been interested in the film adaptation since my kids and I saw the first trailer, I hadn't any interest in seeking out the original story but when I saw it in the back room at work I thought I'd grab it and give it a read. The film jumps straight into Lewis having been freshly orphaned and moving to live with his uncle in New Zebedee. Lewis is a young, overweight boy who quickly comes to love his new home. There are very few characters in this book and we don't really get to know any of the particularly well, they're all easy to figure out and no one changes or grows personality wise. Infact, when it came down to the final confrontation, I didn't find myself particularly caring about any of the characters.

The plot itself is nothing stunning and I kept finding myself hoping for more to happen, it was only the fact that it was a short book that had me continuing to read till the last page. I liked the basic premise of the book, moving into a new house with a secret that has to be discovered before things go catastrophically wrong. This book was praised when it came out but I find that it hasn't aged well and I'm expecting a lot more action in its big screen version as there was very little here. I expect Lewis is meant to be a likeable character and there was a good subplot revolving around that yearning to fit in but I didn't feel sorry for him, despite that being the aim.

In the end, the premise intrigued me but the story didn't entertain me.