The WotWots: Sneak-a-peek: A Zebra review 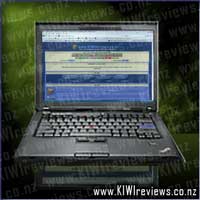 Disclosure StatementFULL DISCLOSURE: A number of units of this product have, at some time, been supplied to KIWIreviews by Lenovo or their agents for the purposes of unbiased, independent reviews. No fee was accepted by KIWIreviews or the reviewers themselves - these are genuine, unpaid consumer reviews.
Available:
via the website

In light of a lack of standardised benchmarking software, and the fact that none of the staff handy were gamers, I am going to forgo the benchmarking stats here. They are scattered all over the net anyways... I want to focus on usability, not gaming. Besides which, this unit was a little hard to assess fully, due to the limitations of demo units. For a start, we were unable to access the mobile broadband without a Vodafone (or compatible-network) SIM card and account, and despite being touted as featuring Windows Vista, the demo unit we tested came shipped with Windows XP! Confused? We were too... so this review is going to basically focus on the hardware alone, and only comment in passing on software-powered features...

One of the first thing I noticed when I unpacked the unit was just how light and easy to lift it was. Honestly, I thought the box was empty at first! At a mere 1.8kg, this laptop feels lighter than the Auckland phonebook! (And about a third of the thickness too.) Powering it up was pretty standard, though it took me a second to locate the power button, discrete as it is. While visually hunting for it, I noticed the double-height 'Delete' and 'Escape' keys, just BEGGING to be pushed. Nice. I also noticed how multi-functioned most of the keys were, in effect cramming about 1.6 keyboards into one. The coolest bit though... no more little panel of indicator lights showing caps lock, etc. The buttons themselves light up! Save space, add style... Rocks!

The keyboard itself is quite comfortable to use... no more cramped than a standard laptop keyboard, but alas, no less cramped either. The down-side of aiming for smaller form factors. However, with all sorts of wireless technologies available nowadays, a more accessible keyboard isn't really an issue to attach... but would it be too much to dream of, to have a laptop that has NO keyboard, but instead projects one of those laser keyboards? Something about the interface system that really struck me as a "Swiss Army Knife" approach... There are TWO sets of 'mouse-button" buttons, a touchpad AND a cursor-knub... talk about covering all the bases! Short of including a pop-up mouse or a slide-away graphics tablet, I don't think you'd find anyone UNable to get to grips with this unit almost instantly!

Speaking of the touchpad... rather different than anything I have come across previously... This one has a knobbly texture on it that feels strange at first, but soon becomes quite an asset, as you can immediate tell without looking how far you have actually moved across it... and when the bumps run out, so has the interface panel... which is important because unlike most laptops I am used to, the touchpad sits flush with the surface, not slightly rebated into the face.

The inclusion of a fingerprint scanner also sets this unit apart from the rest of the running pack... while it has been possible, and in corporate/government circles: highly advisable, to attach an external unit for security, it is nice to see one hardwired into the unit itself. Sure, not exactly new, but this is by far the nicest integration job I have seen in a while... it's tidy, discrete, and even has a nice little notch above it so you can locate your finger at the start point just by touch alone.

When fully functional, this unit comes preloaded with some nice software tools... such as a GPS location system that runs off your mobile broadband signal, wireless networking with 'local' devices, Bluetooth built in, and a host of other little gems such as a Camera Centre suite, Roxio CD/DVD burning suite, WinDVD, and a McAfee anti-virus pack. Not too shabby for a fresh install... but the thing I loved the most was a small thing really... but the small things make or break a consumer item... it was a toolbar-based battery meter that read out the remaining charge in TIME, based on current rate of battery consumption. You don't have half a charge, or a quarter of a charge... you have 1hr 27 minutes at current drain, or 48 minutes of playing a DVD, or 2hr 6mini while browsing over a cabled network connection, etc. I mean, Sony have had that on their camcorder batteries for years, but this is the nicest implementation I have seen on a windows-based PC, bar none!

You have, at the back, an Ethernet port for local cable-bound connectivity (great when you are staying at a motel or hotel with a better pricing plan than your mobile company are offering), a new DisplayPort socket, which is a new system that allows you to connect suitable digital display devices, such as projectors, monitors and HDTV's to your laptop to act as secondary displays. For those old-school, there is a VGA plug on the back as well. Plus, there is a nifty USB/eSATA dual-port for attaching high-speed external storage devices. Yes, that's right, this socket will accept eSATA OR USB... darned clever tech. You also have 2 other USB sockets, one obvious one on the back right next to the combo port, and one on the left side panel near the back. I would have liked to have seen more, but I am assuming there wasn't the space. With so many devices attaching via USB these days, the more onboard ports you have, the better... so maybe they'll aim for 4+ in the next model.

The chassis is all-new, with a lighter weight but pretty much all the same strength and durability. Without applying excessive force, I couldn't get it to flex very much at all, and though the screen has some flex, it stood up well and survived 'above-normal torque' without any adverse side-effects. With the reworked chassis, getting access to innards is a breeze, with a couple of screws at most needing removal before you can basically strip it down to bare bones and non-replacables. Memory, LAN/WAN cards, battery, SIM port, drives, keyboard... all just a flick and click away from upgradable. You can, it seems, even pull out the optical drive and slide in a booster battery pack when needed, if I read the symbols right! The default battery gave us about 4.5 hours at 'fair to peak' usage with everything except the optical drive running, and about an extra hour and a bit at 'barely doing anything' usage. Not earth-shaking by any means... but not bad for a 45Wh 6-cell battery pack.

Quicklist of slight annoyances:
•  No one-button way to deactivate wireless network interface. I like to be able to lock it off for security reasons sometimes.
•  The "ThinkVantage" button features are a little redundant, as it all could have been put in as a simple helpfile.
•  The "Service and Troubleshooting Guide" ran to 76 pages, whereas the user guide only runs to... none! See note above as to why.

Overall, though I don't think I have really seen this unit at it's peak, since it came with WinXP, was touted as running Vista, but is (I am assured by reputable sources) actually engineered for Win7 specs, I feel certain that it cam only get better than this, and this is pretty impressive as is! What made me want to drool the most though was the delightful, delicious, desirable 128gb SolidState Drive in it. This beast runs... SILENT! Yup, utterly free of spinning fans during the entire testing run. I couldn't get it to make any noises other than software-based ones, and though the speakers aren't mind-bending, they do a fair job of playing a wide range of music across the entire audio spectrum, but are far better suited to VoIP and streamed audio than anything serious like music or movies. The onboard twin stereo microphones did some wonderful work when I tested it on videoconferencing... reducing background and ambient noises significantly. (I am assuming some form of doppler analysis going on allowed the system to detect the source of sound as "not right in front of me" and thus ramp the volume down on it. Simple to do in theory, but admirably done in practise.) At around $2800 on sale, $3800 or so normally, this is NOT a 'cool geek toy' by any shot... it is a business investment. A damned fine one too, as the value may depreciate in line with tax laws, but the quality and features won't. Any travelling exec can feel assured that this *is* the unit you need in your briefcase when your keister isn't in the padded office chair. Be aware though that because the SSD/HDD bay is only 1.8inch, the drives are rather pricey to upgrade, so keep an external storage option handy for those big presentation files.

Features:
•  Waterproof, dustproof, dirtproof, sandproof, and drop-proof
•  ClickWheel protected by a thin membrane which remains fully functional through the ... more...