« Stargate SG1 - The Children of the Gods (Final Cut) review 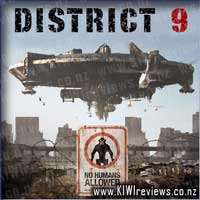 The creatures were set up in a makeshift home in South Africa's District 9 as the world's nations argued over what to do with them. Now, patience over the alien situation has run out. Control over the aliens has been contracted out to Multi-National United (MNU), a private company uninterested in the aliens' welfare - they will receive tremendous profits if they can make the aliens' awesome weaponry work. So far, they have failed; activation of the weaponry requires alien DNA.

The tension between the aliens and the humans comes to a head when an MNU field operative, Wikus van der Merwe (Sharlto Copley), contracts a mysterious virus that begins changing his DNA. Wikus quickly becomes the most hunted man in the world, as well as the most valuable - he is the key to unlocking the secrets of alien technology. Ostracized and friendless, there is only one place left for him to hide: District 9.

This film had something that I haven't seen before; a large group of aliens seeking refuge on Earth. It brings to mind, our attempts to determine a way to colonize Mars ready for when we've finished destroying Earth. It highlights a lot of social insecurities that are still prevalent today. Mainly, racism. I assume in this case, it would be more of a planetism? Speciesism? Whatever the correct term would be, there is a lot of racist behaviour towards the alien refugees. Whether intentional or not, the movie is based in South Africa, the country that has had the most widely known battles against racism and segregation, towards equal rights.

This movie made me think a lot of similar behaviours that I have seen between other races, and it was rather sickening to realise that such behaviour was not only still occurring, but society had gotten back to the point, where it was again almost unnoticeable.

But going back to the movie, the plot was rather thin. Alien refuges with advanced weapons seek to coexist on Earth, but Earth just wants their weapons. A man who unfortunately becomes the key to unlocking the alien technology is forced to hide within District 9 with the alien refugees.

I found it more of a social commentary of how commercial and military interests always come before basic rights, and outlines the racial inequality that is still rife in the world today. Not the most exciting film in the world, but an eye-opener if you let it be.

This was one of those movies that I watched because my husband was very keen on it.

I rather liked the documentary style of the beginning of the movie though it did start to feel like it was dragging on quite a bit. Once it got into the action the movie really speeds up, full of fire fights, exploding objects (and people/aliens) and some rather neat weaponry. The special effects are really well done, the spaceship blends in with the rest of the scenery, looking natural, and the Prawns (the aliens). Vickus slow transformation was done really well, though we only get to see some of the transformation, not the whole thing.

The story focuses mainly on Vickus and our main 'Prawn' who is trying to gather enough fuel to power up his ship and go and get help, when Vickus gets some of the fuel on him it sets off a chain reaction that will change his life forever. The only real character development comes from Vickus, it isn't really needed from anyone else, but that isn't a bad thing. The acting is wonderfully done. My main gripe about this movie (as with any movie that does this) is using a big name, like Peter Jackson, to draw people in when that person actually didn't do a huge deal in the big picture of things.

A good movie, and if you like funky weaponry then this is perfect for you.

OK, for the sake of argument I will have to suspend my disbelief that, firstly: Aliens are going to come to Earth as refugees, with hugely powerful weapons, and NOT use them to enslave us, secondly: that said aliens are going to be willing to accept what amounts to concentration-camp conditions even if they were worse off in their ship, and thirdly: that Peter Jackson stuck his name all over this expecting to earn kudos. Call me cynical if you must, but all three of these are hard to swallow...

The movie, and storyline, if taken on their own merits aren't too bad... the movie starts out annoyingly slow with a badly-filmed-documentary style that left me wanting to dive for cover in anticipation of the thrown popcorn from those in the rows behind me expecting action... as was I. However, things soon picked up and by the half-way mark I was surprisingly quite enjoying myself... this state of affairs lasted right through to the closing credits.

The special effects were, as one would expect in this day and age, top-notch... the Mothership was a seamless part of almost every outdoors scene, and the aliens (or 'prawns' as they get called a lot') were rendered to perfection. Now this is where I seriously got the creepies, as they reminded me a lot of the giant cockroach-alien from 'Men in Black' far more than they reminded me of small seafood nibbles. Since I have a loathing for 'roaches, the aliens were damned hard for me to 'empathise' with... even the good ones!

Overall, the storyline was pretty good, though far from spectacular... and the ending left it wide open for a sequel if punters fill the box-office coffers full enough... but I am kinda in two minds about that... part of me screams "Don't you DARE!" while another part says "Well, it would be good to see what comes of this..." so... will just have to wait and see. Despite being pretty good, this was a far cry from the titles I now expect from our illustrious 'PJ'... there was just too much 'dull fluff' at the start to really make a good first impression. Utilising a 'current' scene at the start, then filling the gaps with flashbacks *might* have grabbed me more... but I guess PJ left it to the director's judgement... and on his neck too.

After the Bergens invade Troll Village, Poppy, the happiest Troll ever born, and the curmudgeonly Branch set off on a journey to rescue her friends.