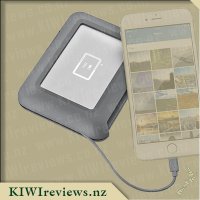 Disclosure StatementFULL DISCLOSURE: A number of units of this product have, at some time, been supplied to KIWIreviews by Seagate Technology or their agents for the purposes of unbiased, independent reviews. No fee was accepted by KIWIreviews or the reviewers themselves - these are genuine, unpaid consumer reviews.
Available:
at quality retail outlets

Photographers, videographers, drone pilots - you've got enough equipment to lug around. DJI Copilot is here to ease the load and usher you into the world of BOSS - that's Backup On-Set Solutions.

The rules and regulations surrounding drone flights in New Zealand mean that nowhere within easy travel of my home allows me to fly them, due to the local hospital being one of the bases for rescue choppers - flightpaths are impossible to lock down, so the CAA applications process has made it effectively impossible for me to fly the drone above 10m. That gave me a moment of pause when it came to testing this unit out, but I soon found that it works brilliantly for photographers of a more grounded persuasion too. So it was with cautious optimism that I embarked on a 3-day photographic trip around and between Hamilton and Auckland, with this tidy and compact unit ready to do its thing.

Having fully charged it up, and checked that I had plenty of spare camera cards just in case, off I went. The trip to Auckland took close on 5 hours because of all the stops and time spent snapping away. When the first card was showing full, I was keen to start testing... and to say I was surprised would be an understatement - I was excited to see how useful it was going to be, on the road, or more precisely, on the side of the road. The first thing that became obvious was that it's designed to connect with as many devices as possible, allowing that some of the devices may need adaptors. Under the removable splashproof cap, the ports include a USB 3.0 Type A, a USB Type-C, a USB 2.0 microUSB, and a pin-type power port. You also get a SD card reader port too, that was quite happy reading my 256gb cards... which is more than I can say for my desktop PC. There appears to be a pin-hole for hard resets too, but thankfully I had no need to test that idea, because the unit worked beautifully.

The microUSB port, it turns out, is designed to carry one of three cables. They all have the same rubberised brick of a plug to go into the unit, and the cables can be swapped out easily to cover devices that use either microUSB, Lightning or USB Type-C. These appear to be designed to basically stay on the unit as your default connection, and thanks to the clever design of the rubberised casing, you can wrap the cable around the unit - clipping the cable into the groove around the sides - and seal both ends under the splashpoof cover. This makes it quick and easy to get your rig fully set up and running without digging for missing bits. Pop the cover, unwrap the cable while the unit is powering up, plug in your mobile device and slap in your memory card. It took me less than a minute to get everything connected, and soon after I was watching the transfer chugging away as thumbnails of my images were popping up in the app on my phone.

After some playing around, it was soon apparent that while you can control the entire process using the single button and the built-in screen - cleverly hidden under one of the sliver face panels - the app is much easier to work with and offers you a more intutive experience. Terse status alerts and blinking lights aren't as readily informative as the app, so I stuck with that. It may not have been the best move though, as I later found out. Still, this method meant that it was a very simple and easy process to grab copies of images and videos off the drive quickly, for on-site processing and sharing via social media. This was a remarkable feat and one that impressed me hugely. Because of some of the editing apps I have on my 'travel phone' it was easy to combine images from my DSLR and some taken with my phone to make collages and slideshows with a minimum of effort and fuss.

Battery life was a matter of surprise too, but not in a good way. I filled up a 64gb memory card in my first photo stop, because I always shoot in RAW mode and thus each image is quite large. Copying that much data is a matter of minutes at USB 3.0 speeds, so that was no issue, but I was horrified to see almost half the battery gone by the time it was finished. It seems that the strain of copying data while having to feed updates to the app on my phone was far too much effort for the battery. Despite checking official documentation and various websites, I can't find any mention of the battery's capacity, and without pulling the unit apart physically - which I can't do because it's a loaner - there's no way for me to determine just how big, or small, the battery is. I can say though, that whatever it is, it's not enough. I liked that the USB Type-A port meant that you could use this unit as an emergency power bank though, despite the fact it meant robbing Peter to pay Paul in many ways - by taking power out of the already under-juiced battery, you reduce the operationb time of this unit even more. Still, it comes to a choice between storing photos or calling for help, I'll take the phonecall option any day.

Overall, having 2 terabytes of portable, self-managed storage on-hand is something that has to be appreciated. The only two downsides for me were the short battery life, and the odd decision to use a dedicated power port instead of the now-ubiquitous USB options. I carry an assortment of USB cables with me every time I travel, just in case something needs a top-up charge, so to have no choice but to carry a cable that serves only a single purpose grates a little. I would be stuck without the ability to use this unit, were I out on assignment and the cable was lost of left behind, so it loses appeal and 'smarts' points for that. With battery technology the way it is now, I would have been OK with a larger unit if that extra space was packed with battery, giving me stress-free usage for longer. Still, one learns most from the mistakes, so here's hoping that the next iteration resolves these two issues, making it a top contender for the ultimate must-have portable image storage solution. Until then though, it's still a great unit and one that has many potential benefits for anyone who has ever found themselves with all their memory cards full and no access to storage, forced to sit in frustrated rage while that perfect shot fades away.

The Linksys ADSL2 Gateway with 4-Port Switch is the all-in-one solution for Internet connectivity in your home. The built-in ADSL Modem function gives you a blazing fast connection to the Internet, far faster than a dial-up, and without tying up your phone line. Connect multiple computers to the Gateway via the built-in 4-port 10/100 Ethernet Switch to jump start your home network.

You can share files, printers, hard drive space and ... more...