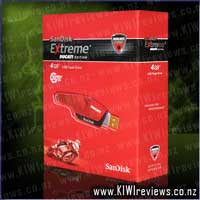 Disclosure StatementFULL DISCLOSURE: A number of units of this product have, at some time, been supplied to KIWIreviews by SanDisk or their agents for the purposes of unbiased, independent reviews. No fee was accepted by KIWIreviews or the reviewers themselves - these are genuine, unpaid consumer reviews.
Available:
at selected retailers

* Based on internal testing; performance may be lower based on host device.

In a move away from the bog standard flash drives, Sandisk has teamed up with motorbike manufacturer Ducati to produce what is without doubt the sexiest flash drive on the market.
Well, okay, it's not like there's a whole lot of competition for that title but even if the market was bulging with sexy looking flash drives, this little sucker would still be in the lead.
Designed to mimic the lines of a Ducati motorbike, the flash drive is shiny and red with a Ducati badge and, my favourite part, a working tail-light.
But there's more to this little red rocket that just looks, there's also the speed issue. And once again, Sandisk nails it. I've been using it to transfer files between computers at home and the office, dumping files full of high-resolution images on to it on a regular basis. Never once did it falter, and every time the files loaded so fast it almost made my head spin.
Another point in its favour as far as I'm concerned is the weight of it. This isn't your normal wee tiddler, it's solid piece of equipment and I no longer worry about my flash drive getting knocked around in the bottom of my bag. No, this thing is more than capable of standing up to the rigors of living in the bottom of the average woman's handbag.
There's not much more to say: it looks good, is fast, reliable and anything with a Ducati badge on it is worth having. Especially when it's not as expensive as owning the two-wheeled version.

It's got style oozing out of every molecule... it's just got a terminal case of X-Factor'itis... it's Sandisk, it's Ducati... can it get any better?!

Well, actually it could... it could be a bit cheaper... but for those, like me, who think quality is worth paying a little more for, it's still a very nice accessory to have on hand, and as I have found out on no less than 18 occassions, it turns heads whenever you pull it out of your pocket and plug it in.

I tested this unit over the Christmas Holiday break, and now that I am back in the office do you think I can find all the bits of paper I had with the speed test numbers and benchmarks written down? Oh no... not a chance... but I can tell you this... the "ideal environment' that is used to speed-test devices such as this can never be found in the real world, so don't expect to get 20 meg-per-second transfer rates... if you do... you chose to swallow the Blue Pill and went back into la-la land... However, I was very impressed with the peak transfer speed of around 16 mb/sec that I got with a 500mb text file, and I was able to stream and play video data directly off the drive without any pauses for buffering... so it's certainly plenty fast enough.

At 4gb, the unit isn't the biggest storage unit available, and I would love to see a 16gb version out one day... the chips are in the market, they need only be swapped into the assembly line methinks... but of course a related rise in pricetag may put some potential buyer off a bigger storage version.

Overall, style factor 120%, (I love the activity light being the taillight... so cool!), functionality 100% and just all-round geeksnob factor 140%... now if only we could shave the price down... it would be a total market-grabber!